Speed Not Tuned After Switch To Fibre

Just over 3 weeks ago I switched to faster fibre with speed boost and looking at the various help pages was led to expect that for 2 weeks the connection might be up and down as the connection was tuned for best speed.  After 3 weeks my router stats showed the DSL Up Time to be 21 days and a few hours, exactly as long as it had been since the engineer swapped my connection to fibre.  This makes me think that no attempt had been made to get the best speed.  At the time the stats showed 15938 upstream rate and 58834 downstream.  The estimated connection speed is shown as between 67 and 80.

I then switched off the router for 30 mins and turned it back on and got 16464 up and 59186 down, a slight improvement but still below the lowest estimate.  Since then again I've seen no apparent automatic attempt to improve the speed.

1.  Why has the system apparently not tried to improve the speed?

2.  Is there anything I or anyone else can do to try to get closer to the estimated figures?

I'm still keen to pursue an improvement in download speed but won't be able to fit in an engineer's visit until after Christmas.  Is it OK to leave this thread open until then and use it to contact you to get the visit booked in when I'm ready?

Yes the router is capable sync at 80Mbps and higher, if you decide to go ahead with the engineer visit please let us know

I'm running out of ideas to try before getting the Openreach engineer out.  I changed the cable between the master socket and router this morning and see no difference in upload and download speeds.  Can someone confirm that the router and its firmware is actually capable of operating at the estimated 67 - 80 Mbps download speed? Details are on the attached screenshot.  Any suggestions as to any other trouble shooting I can do gratefully received. 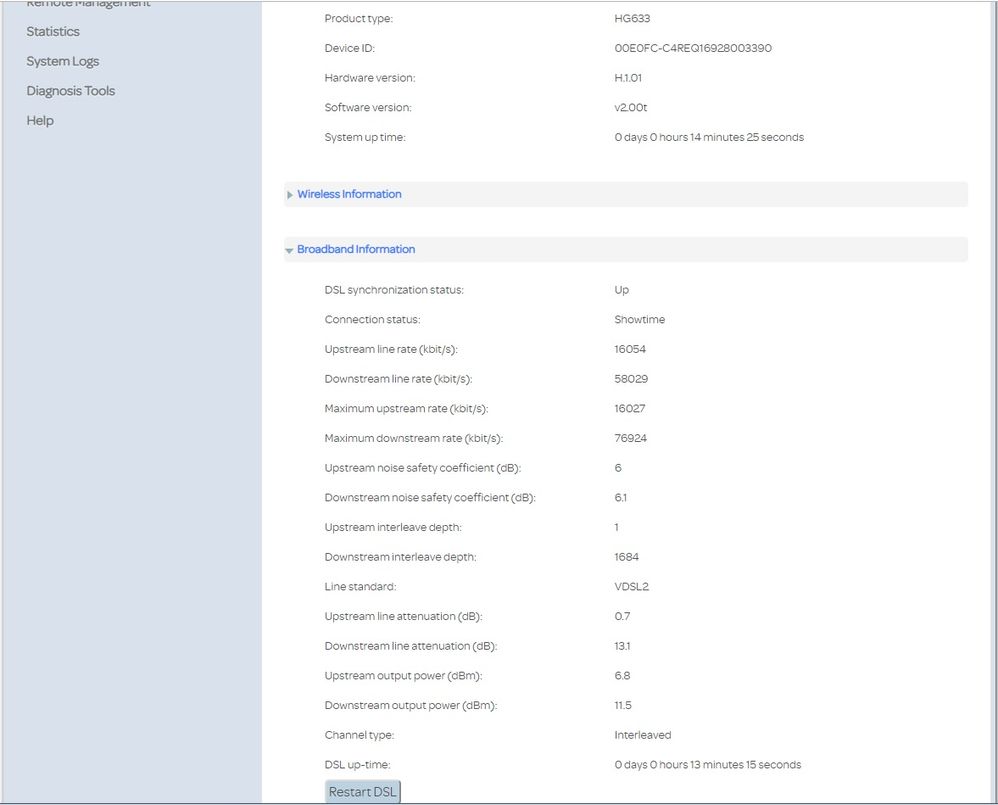 Thanks Chris, could be an expensive gamble - I'll mull it over and get back to you next week.

Sorry, it's the Openreach engineer

Thanks for the link Chris but it shows several different types of visit, which would it be in this case?

There would be a potential charge - please see Engineers charges, for an explination of when charges would apply

Provided that there's no charge to me for the engineer's visit then yes, please arrange one.

OK thanks for trying that, we can log this out for an engineer visit to see if your speed can be improved, would you like us to arrange this. If you would then we'll just need to confirm some details

Speed test repeated as requested, no real change.  Upload and download speeds are within 0.1 Mbps of those obtained the other day.

Will do, I'll report back tomorrow.

The DSL up-time I'm seeing on the router stats this morning corresponds with the time since I last re-started it which to me, and correct me if I'm wrong, indicates the DLM did nothing over night to adjust the connection speed.

Thanks for running the tests. Your speeds are within the acceptable range albeit at the bottom. Could you leave your router connected to the test socket for for another 24 hours and if there's no speed improvement we can arrange an engineer visit

Ran 3 tests at least 10 mins apart with the laptop connected by ethernet:

Thanks for trying that, can you run a couple of speed tests at least 10 minutes apart on the My Account speed checker, on a device connected to your router by Ethernet cable if possible

Thanks. Could you try disconnecting the powerline adapters and then switch the router off again for 30 minutes, then switch back on and check again to see if there's any speed improvement

FWIW the connection speed I was getting with my non fibre TalkTalk service before switching was well within the estimated range, around 16500 Down IIRC.  Nothing has changed this end since then.