I'm new to talktalk. I just switched from virgin media. I've spent far too long on what should be a very very simple problem with DHCP and I'm starting to get frustrated with it. Googling hasnt helped. Neither has contacting talktalk tech support.

Anyway, back to the point. I just removed my virgin media router, plugged in my talk talk hub.

Now I have quite a lot of kit in my house. I use my own DHCP server. Most things are also configured with static addresses out of scope. I also have some more bespoke products like particle photons and other IOT devices, its a much more complex setup than your average home user.

The short story is, like 99.9999% of all other routers available, I'm trying to set the talktalk hubs ip address from 192.168.1.1 to 192.168.0.1 and turn off DHCP, thus in an instant, allowing everything to work as it was before without having to reconfigure everything in my home environment, some of which would be an absolute pain to do especially with the IOT chips.

Thats one ip address to change and one button to click save.....

I did it when i moved to virgin media. I've done it for my family and friends when they've changed routers or isps.

Never had any issues with this simple feature before.

Then along comes talktalk and their great idea to lock down/modify the sagecom which i have no idea why they would butcher the firmware in such a way to prevent people from doing this.

You click save and you're just thrown an error 'invalid ip address' under the dhcp pool settings. Even if you switch off dhcp: 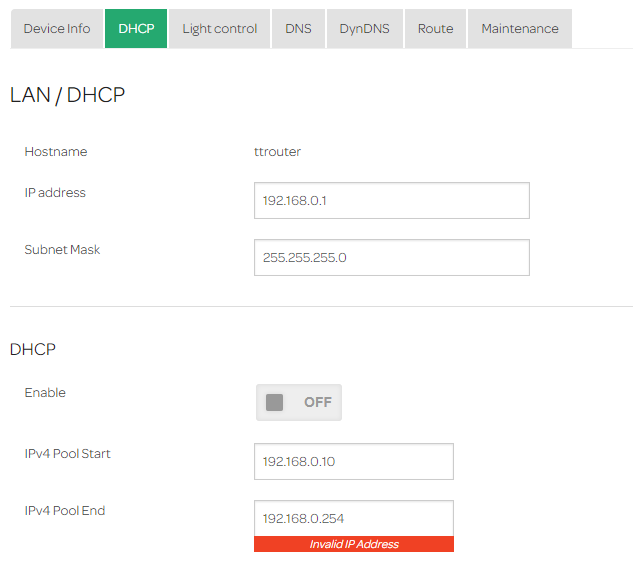 I've googled my problem and can see lots of people have had the same issue, i'm finding articles back to 2018 with still no fix. Some have suggested 'workarounds' due to bugs, setting certain ranges or clicking apply before taking focus away from the box etc, none of which have actually worked for me.

This was also logged back in 2018 and its still not even been accepted....

I also contacted talktalk support and was passed through to someone who completely misunderstood what i was asking for, then after clarifying they couldn't offer any advice other than to post here. Telling me that nothing in the router settings is supported....

I've come to expect bad customer service with virgin media and that was part of the reason i jumped ship, but as my first interaction with talktalk who I expected better from I'm seriously let down already. Luckily I'm still within my 14day cancel period so unless I can get some helpful advice on this one, a different router with this functionality or a firmware that lets me adjust basic settings. I think i'll be considering this as an option.

I haven't read all of your post admittedly, but if you are having DHCP issues and the Hub's DHCP server is disabled, should you not be setting the scope on your own DHCP server.

Please read my post before you offer advice. Look at the screenshot.

If you looked at the image I posted you'll see exactly what I mean as it throws an error which prevents this. If I refreshed the page as you see it.. DHCP is still enabled and not turned off. The IP is still set to 192.168.1.1

Also got in touch with talk talk. They were unhelpful. Offered to log a complaint and I'd get a call back in 72hrs. I got a call yesterday, answered it to just background noise, no one talking. Tried calling them back and it was an automated response telling me I'd get another call. Still no further attempt.

The very fact that your screenshot showed the DHCP server on the router as disabled, I couldn't see how that illustrated a bug.

When you make such a long opening post it does not encourage me to read it fully.

Now that you have provided a shorter version I will read that later. I am not interested in all of the communication you have had with TT, only the technical aspects.

What version of firmware are you using on your hub, I cannot see any mention of this? A lot of the issues in the thread that you refer to have been fixed with the current V2600 firmware:-

I have not noticed any problem changing the hub's IP address since firmware V2600 was introduced, but then I am obviously still using the hub as the DHCP server.

Not having another DHCP server myself, if I test this, I kick other people off of my network. This means I won't have the time to test this until later this week. So I think it best if I pass this direct to the OCEs to feed up to TT's devices team.

Possibly another bug, but the customer hasn't yet said what firmware is in use on the hub in question. I won't be able to confirm this until later in the week, so perhaps you can pass up to the Devices team for their testing? The customer can not:-

Thanks, I do realise that you have the hub, it was just that you had not stated the firmware version. I have now passed this across to the OCEs as promised, who will hopefully pick this up tomorrow & pass it over to their devices team for them to test.

Thank you. This is the first constructive help I've had with the issue.

I have had an unexpected moment to try this & must completely concur with this customer. You cannot change the routers IP address, just changing the address & clicking Apply produces the same Invalid IP Addresses errors.

The only part of the changes that this customer wants to do, is to disable the hub's DHCP Server, but even with that disabled, you cannot change the hub's IP address.

I will add this to my bug report plus another one I found out whilst doing this, backup & restore does not restore existing DHCP scope or reserved IP addresses. Full details to follow.

Hopefully, Karl will pick this up tomorrow & pass it over to the TalkTalk's devices team.

Sorry for the delay. I've passed this feedback over now.

I appreciate the help on here, but I'm not expecting this to be a quick fix judging by how these things have gone in the past, for other new joiners to talktalk who come across this and it causes problems, I hope it eventually gets resolved.

Either way, I persisted with talktalk over the phone, with great frustration and at times nearly gave up and admitted defeat.

I've ended up spending countless hours on hold, countless hours explaining that I don't want a static external/public address since my issue has been misunderstood and I've had to re-explain my issue at least 6 or 7 different times to supposedly 'technical' members of the support staff who my call had been escalated to.

I've been told my third party devices were at fault, they also told me i'd have to pay £30 for them to send a different router which would fix the issue.

In the end, I managed to get them to admit that it was a bug with the firmware and they have finally sent me a free replacement, a HG635. While it's an older router and may not perform as well with WiFi, it's probably negligible for my usage. It does the job for me and it also allows me to change the local gateway address and turn off DHCP. Hallelujah.

I'm sorry to hear this and thanks for the update. We will post on the Community once the new firmware for the wifi hub is available.