In January we converted an old PC to Linux and it now  operates as a NAS plus operates a few extra tools including running a speed check at least once an hour and, since the end of June getting the Sync speed reported by the WiFi Hub.

This proves that we were experiencing a stable connection.  Our sync speed was 26.21 and thepeak measured speed was around 1mbps lower (clearly there is some 1mbps of overhead in our system preventing us ever experiencing the full sync speed.

Then at the beginning of August our Sync speed started rising whilst our measured speed soon dropped.  Switching the router off for 30 minutes recovers the measured speed back to around 18mbps but it then falls again.

Interestingly simply switching off the hub's wifi and disconnecting all wired connections for a minute also seems to clear the problem.  This is similar to an issue we had back in March.

I'll try to upload a picture.

It seems to me that the problem is highly likely to be in our premises.  Probably a hardware or sofware fault with the router.

I would also welcome advice from the experts in the community:  Maybe there is a way that I can reduce the load on the router.  Both Pi-hole Dot DOH and our Managed switch appear to have capabilities that we could learn about and implement if it would help.

Our issues do not relate to wireless.  Although we have lots of wireless devices (4 phones, 2 ipads, 1 cameras lots of IT and up to 3 laptops) our principal devices use or can use when experiencing difficulties  our wired gigibit home network.  All of our wireless devices can achieve expected speeds  to our NAS. 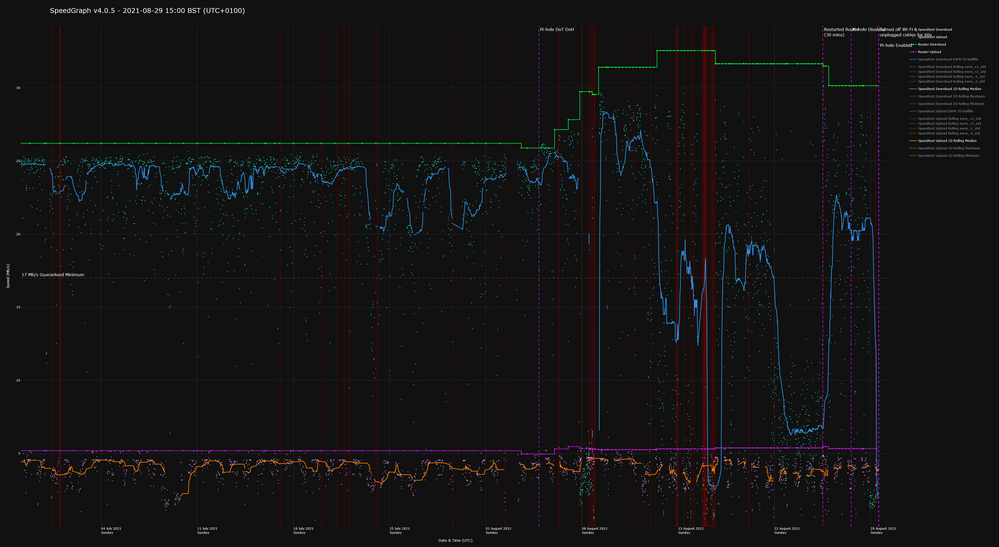 No device will run at the sync speed, you should get around 80% ish of the sync speed via a speed test. This applies to both Ethernet & wifi devices.

Disconnect all but one device & see how that is, then gradually add them all back in, one by one until the problem happens again & you should have the culprit.