My wifi hub has now been installed and running for a few days with DLM making no changes, so some sort of interesting stats from the gui that an OCE may want to feed back to the development team.

Downstream noise margin is being reported as 0.00 dB.

Upstream attenuation is being reported as 0.00 dB.

Downstream attenuation is being reported as 25.90 (usually been in the 19-21 range with previous TalkTalk super routers).

But the thing that concerns me is the performance of this "best ever" modem-router.

I have listed the upstream performanc loss already.

With this new wifi hub my max. rate has dropped to 35 Mbps with an actuall of 32 Mbps. This unexpectedly large drop in downstream performance could be linked to the unexpected rise in the downstream attenuation.

But having spoken to someone in the faults team they are happy with this performance level as it is still within my predicted range (but massively less than I used to get). It would appear that everytime TalkTalk introduce a "new, improved" router that my performance levels go south.

But the wifi is better, although I never had any wifi issues, and this new router didn't resolve the issues I was having with the HG633 with V2.00t firmware.

Will the credit show up fairly quickly in "transaction history" or do I have to wait until my next bill ?

I'm happy to honour OCE_Ady's offer, I've ordered a returns bag it should be with you whithin a couple of days. if you could bump the thread three or four days after you return the router we'll check that it's back.

I think I may be doing the same thing. Can someone confirm what chipset this router is based on, is it a broadcom? I'm glad I paid £30 for this and not the £120 asking price...

It looks like DLM did not make any changes last night and this morning's stats. and speed tests are consistant with those reported yesterday. So potentially I may be right back to where I was a month and a half ago with degraded performance and a stuck profile following my initial move to V2.00t firmware on an HG633, but early days yet for DLM to react.

The one thing that is clear from the last few weeks of testing is that my HG633 and HG635 both have the capability to outperform the FAST5364. So any claims that the new wifi hub is one of your best yet appears to be misleading. Apart from the lack of performance I haven't even seen any improvements in wifi signal quality (which was always quite good in my property as evidenced by the speed tester results that I shared yesterday).

The wifi hub was arranged for me via the CEO's office to allow me to test if the new router correctly recognised the availability of vectoring (or not) on my line. I agreed a payment of £30 based on the theory that if it worked great, but if it didn't at least I would still have the "latest and greatest" router. Vectoring was not recognised, and my performance demonstrated a fairly significant lose of capability.

The FAST5364 did not resolve the vectoring issue, it did not improve my wifi performance and it degraded my broadband by an unacceptable margin - I would class that as a fairly epic fail.

I would like to return this wifi hub for a refund, as offered by OCE_Ady last week (and previously accepted).

If you (or @Debbie-TalkTalk) can confirm the refund and forward a returns bag I will despatch the router to you as soon as practical (and continue to use my HG633).

"30.2 Mbps at a wireless device on a 30.7 download figure would be very surprising.

Or is this yet more TT inconsistant stats. ?"

I agree (30.2 over wi-fi with a 32.4Mbps sync speed is also very high) - the sync speed is from Openreach stats not ours and it's still showing at 30.7Mbps

(thanks for returning the router)

I have just posted back the second wifi hub that @Debbie-TalkTalk had kindly provided for testing.

No point in keeping two.

A little surprised by your statement that I am now in sync at 30.7 Mbps.

My router stats are showing 32.2 Mbps (only 150 Kbps different) and two speedtests done via a wifi attached pc are indicating 30.2 Mbps (TT's own tester) and 29.5 Mbps (ThinkBroadband).

Given the usual loss between router and any device (particularly wifi attached) the numbers I am seeing are more consistant with the router's reported 32 Mbps download.

30.2 Mbps at a wireless device on a 30.7 download figure would be very surprising.

Or is this yet more TT inconsistant stats. ?

There was a profile change in the early hours of the Saturday morning, but it only made slight adjustment. Line test is showing your current sync speed is 30.7Mbps so little bit down with the HG633 compared to Wi-Fi hub 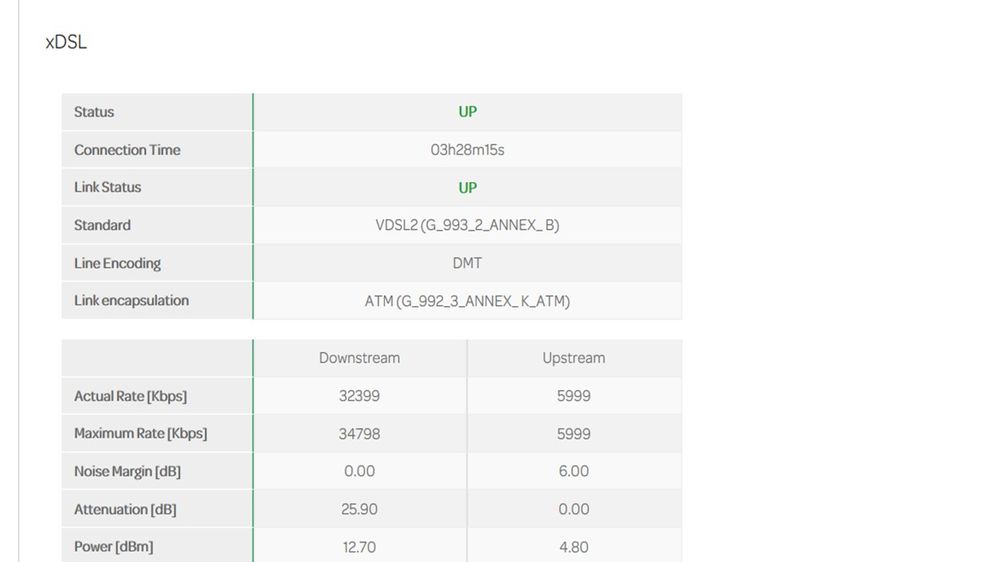 It seems that DLM may have attempted some sort of reset around 04:30 this morning, but it has made no significant difference to any stat. - so very much a spot the difference competition from all my previous wifi hub stats. 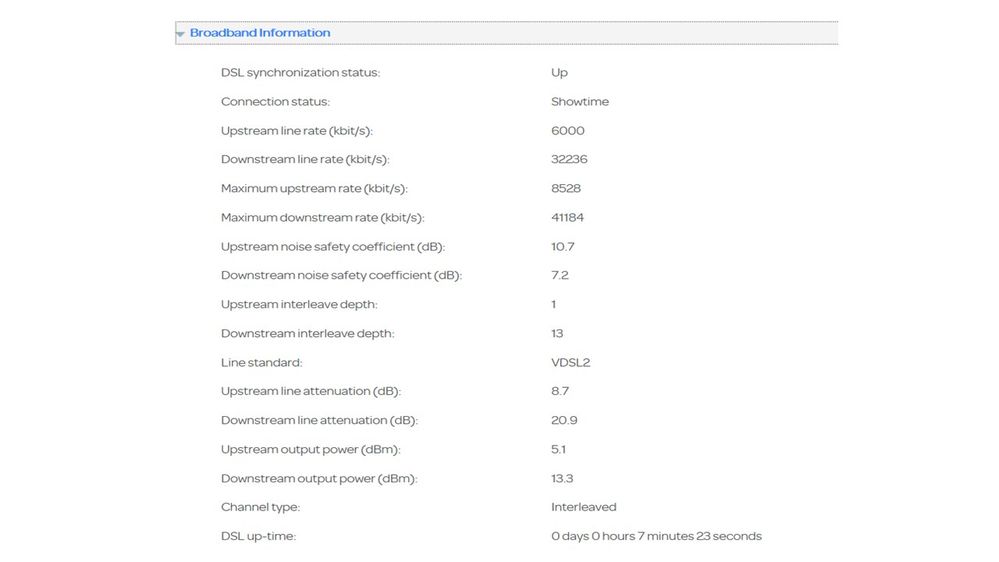 Down stream attenuation now back to my "normal range" - 20.9 dB.

Max. downstream has now risen to 41 Mbps - around 6 Mbps more than the wifi hub was reporting.

I will now leave this configuration running for a few days and see if DLM does anything positive.

Anonymous
Not applicable
In response to AldridgeAndy

Looks like you also have some dubious attenuation and SNR gui stats there from your wifi hub, which again do appear to be reflected in the performance oriented stats. Because your 40/10 package appears to have lots of headroom I'm guessing you aren't experiencing any actual impact.

But I will continue to bang my head on the wall that is TalkTalk.

Apologies for my post but I have been following your topic with interest.

For comparison my TalkTalk 3782 Router reported familiar (very close to HG633) line stats as below...

But the new TalkTalk Hub reports the following... 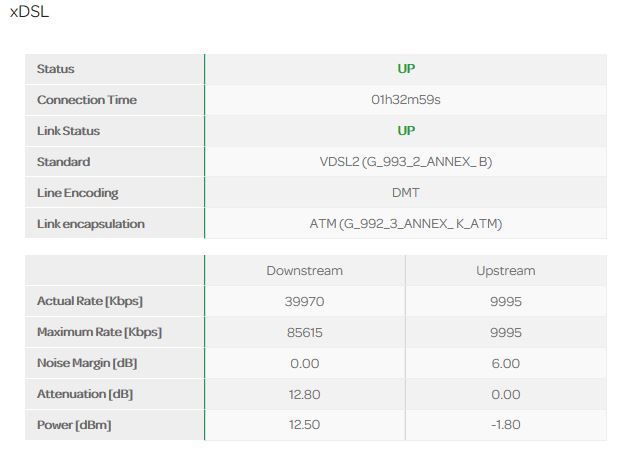 Sorry, never heard of soft and hard banding, the band cap is set based on connections drops and/or the number of errors, measured again predefined limits as per the algorithm. If the connection remains stable with a low error count then DLM should move you to a faster profile (higher band cap), that's why we ask you to leave new equipment connected for a few days, to give DLM chance to monitor the line make any adjustements.

You say my line has been banded to around 32 Mbps.

Is this a normal "soft banding" that DLM should adjust over time based on line statistics and performance or a "hard banding" based on very poor stability that is fixed and requires BTOR intervention to remove ?

"The max. downstream as being reported by the wifi hub appears to be consistant with the reported attenuation."

Thanks for the information. Just to clarify (so that I can feed this back to our product team) as the actual sync speed of the wifi hub doesn't appear to be any different to the HG635, is your only concern the actual difference in the router stats (attenuation, SNR, potential maximum speed) rather than a difference in real world performance?

Sorry @Chris-TalkTalk just seen this post, didn't seem to get any notification.

No I am not specifically concerned about the difference in the router stats. I am very concerned by the massive drop in performance I have suffered in the last month or so. Which are evidenced in the router gui stats.

You have previously informed me that my line is being banded to around 32 Mbps, so that will be overriding other parameters. It would not matter that the HG635 gives me far better downstream speed than the wifi hub if the line is banded to below that level (and would potentially take a few days to recover).

From the unbanded HG635 and HG633 values from a couple of months ago I have lost nearly 30% of my downstream speed (max and actual) - that is what concerns me.

The max. downstream as being reported by the wifi hub appears to be consistant with the reported attenuation.

I currently plan to leave the wifi hub connected over the weekend (as requested). If nothing significant happens then I will swap back to my old HG633 router to see how that reacts.

I would have thought the DLM was limiting his sync speed at the moment, however as he's stated the new hub is not calculating attenuation and missing other stats altogether. If it's not calculating properly he's not going to move off his DLM profile, or have i got this wrong? This will effect his real world performance as the stats are incorrect and showing him further away from the cab. My hub is exactly the same, i left it 30 minutes before installing and it sync's lower than the HG635. My stats are also dubios, I do think this leans toward a firmware issue.

Thanks for the information. Just to clarify (so that I can feed this back to our product team) as the actual sync speed of the wifi hub doesn't appear to be any different to the HG635, is your only concern the actual difference in the router stats (attenuation, SNR, potential maximum speed) rather than a difference in real world performance?

As there was no significant difference between the old and new routers I have reverted to the originally supplied router so that I could return a "pristine" router, if you would handle that any differently to normal returns. Also customising (SSID's) etc. on the "new" router would have been an unnecessary effort.

It is unlikely that DLM will make any significant changes whilst the wifi hubs are reporting such an unusually high downstream attenuation.

All my previous routers calculate a downstream attenuation of around 19 dB to 21 dB. These wifi hubs are calculating just under 26 dB. My understanding is that attenuation can (all things being equal) be roughly taken as a measure of distance from source (cabinet for fibre). And distance is associated with downstream speed capability. My house has not moved.

Although I appreciate that you personally ignore the max. value, but this increase in downstream attenuation has cause the reported max. downstream speed to my router to be significantly depressed, thereby also reducing throughput. The relationship between attenuation and speed is well documented (e.g. Kitz) and IMO cannot be ignored.

Whilst my max. downstream is set around 35 Mbps DLM's ability to increase my actual line speed is fairly well non-existant.

I suspect that this potential miscalculation in the negotiated attenuation between my router and local fibre cabinet is a significant factor contributing to the poor performance I am experiencing (with both wifi hubs, but not HG based routers). And that together with the other stats being produced by the router (SNR of zero etc.) would tend to indicate a potential firmware issue.