Can someone please tell me how good or not the Wifi Extender Kit is currently offered at £25?

I realise I have a weakness with my in-house wifi in the upstairs rear bedroom which I use as an office. I have the latest TalkTalk Wifi Hub downstairs and generally wifi will effectivelly reach most areas of my house but now and again I have a problem upstairs such that the wifi is took weak to even open web pages on my windows 10 computer.

around -70dBm in the rear bedroom I have a problem. I often get wifi around -50dBm and at this level I have no problems using my computer.

What I want to know is will the addition of the TalkTalk Wifi Extender kit solve my wifi problems?

It is impossible to guarantee anything where Wi-Fi reception is. However, the Wi-Fi extender is very good especially at this price. It has one or two small bugs in the firmware, but they should hopefully be fixed in a new firmware release due soon.

That said, whilst you have looked at the signal strength with your WiFi analyser, is the loss of signal purely down to distance, or is it caused by WiFi interference? If the latter, there is always the case that introducing extra WiFi networks, such as those from an extender, can actually make things worse. If you want to send me screenshots from the 2.4G & 5G channel views, plus the AP view & signal strength/time graph, I will try & answer your question from a more accurate standpoint. I will need to know the network names (SSIDs) that are yours. If you would rather, you can PM them to me, but please put a link in there back to this thread, so as I can easily find it.

Thanks Keith for your reply.

Should I send screenshots from my wifi analyser results when in my office ( rear bedroom) when i have a wifi problem or anytime?

Sorry if this sounds a bit stupid to you but i am still in the understanding stage when it comes to the subject of wifi.

Today my wifi upstairs is maintaining a good connection. The anyliser is regularly showing -60 to -58dBm on the 2.4 GHz signal. At this stage of today I am not sure when it may alter to cause the connection problems I have been periodically experiencing. I have noticed that the signal does alter up and down in an instance when other SSID's even on other channels change. My signal has been alone on channel 11 today and good.
I thought I would update you as for the remainder of this week I may not get around to anylising things. I will get back in touch once I have the poor performance results to share.
Thanks G
0 Likes
Report Inappropriate Content Reply

OK,but I can't comment without seeing the analyser screenshots. 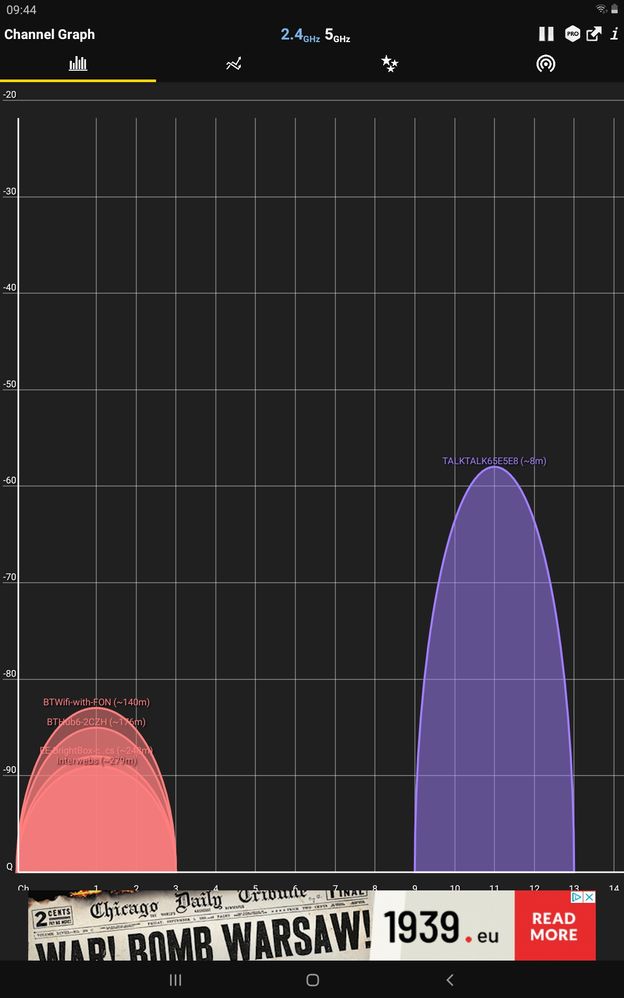 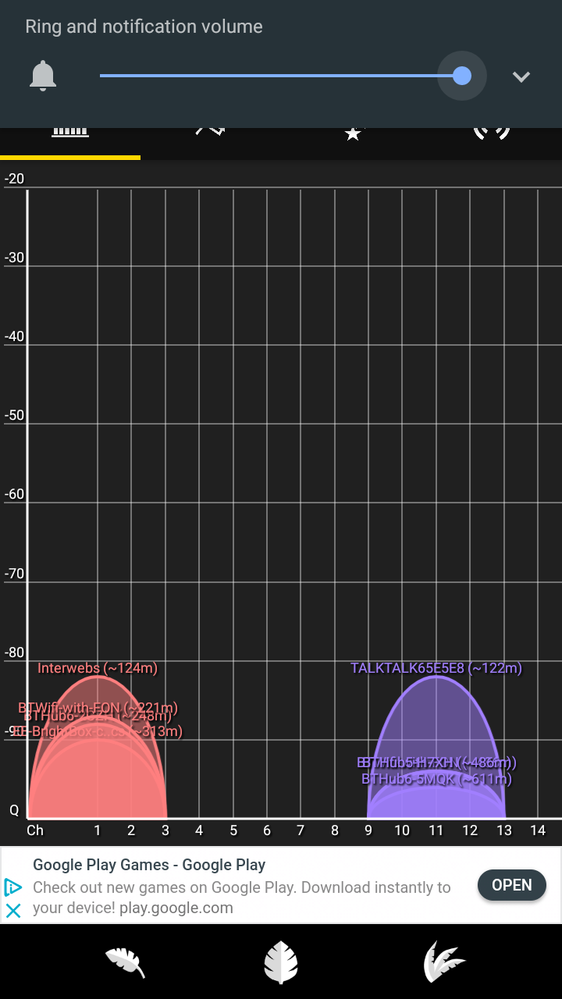 Apologise for no script. I had written some info on an earlier post with these photos added but for some reason it looks like that post has gone missing.

The crux of the results today are that I managed to get result from both ends of the spectrum. I hope this is enough information for you to be able to advise me further on the Talktalk extenders? Of course I am not asking you to guarantee anything just your opinion.

You do have enough spare WiFi channel s to make it possible for an extender to help, so this could be the solution. However, I would also look as to where the router is situated.

This is the best router location, but obviously, this is not always practical & a compromise has to be reached.

Thanks Keith you certainly give me plenty to think about. I am pleased you have suggested the extender may benefit my signal upstairs and I will therefore give that a try.

Just be aware that the TalkTalk Wifi Extender uses powerline technology so this will also be dependent on the quality of your home wiring. I had a problem with the signal reaching upstairs due to a very thick wall. As the signal couldn't reach the room (which was part of an extension) I put a powerline adapter into that room and the signal was poor. This was because it was on a different circuit and went through a circuit breaker so the speed was very slow.

For £25 it is worth having a go but I ended up going for a mesh system (Netgear Orbi) and it has resolved all of my wifi issues. You can find out more about mesh at:

Thanks to one and all for your advice. I have the extender which was simple to install. Wifi signal now much improved in my upstairs room. I now have two signal graphs showing 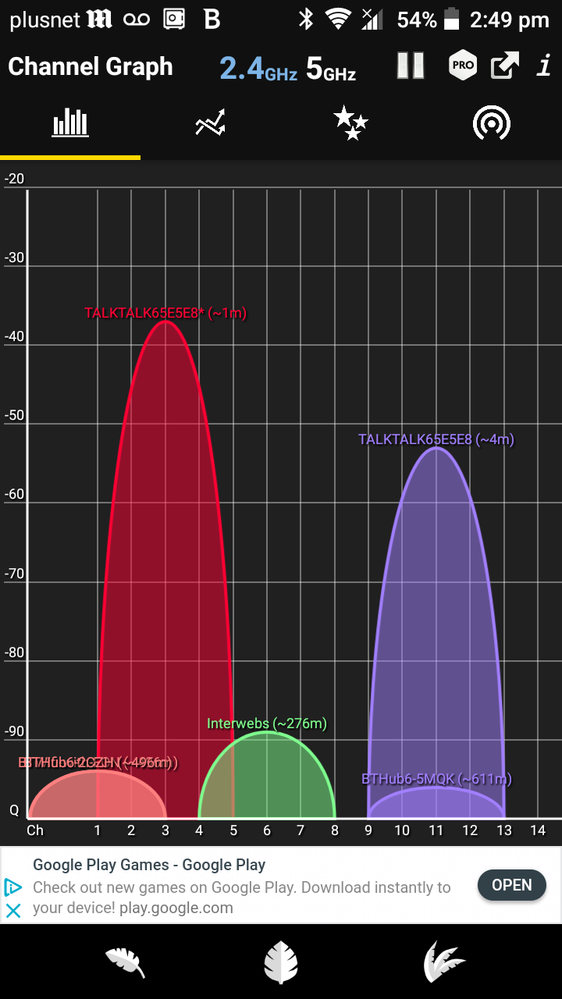 for the same SSID. Is this ok?

Yes that is perfectly normal. However, the red one on channel 3 needs to be moved to channel 1 (you can only really use channels 1, 6 or 11 in the 2.4GHz band). I can't tell from just this one screenshot if this is the router or the extender, if you want to include the AP view, then I will know which is which. However, you will need to expand the SSID in the analyser to show all of the APs within this SSID (there is probably four of them, two in the 2.4GHz band & two in the 5GHz band).

This shows all of the BSSIDs (APs) within this SSIDs

Thanks Keith for your latest reply. Its now getting rather technical which I may struggle with to keep up but attached are screenshots from the wifi signal graphs and one of the Access Points in my upstairs room this morning. In the process of carrying out these screenshots that for the AP  shows the signal from the extender moved from channel 1 on the graphs to 13? The extender is the pink graph.

I am pleased that you say having both the router and extender signals jointly displaying is ok for my wifi proved I think with the satisfactory way everything now seems to be working, my wifi printer and laptop computer in this room. I expect the signals will continue to change channels automatically as before as thinks which I don not really understand change with my wifi signals? 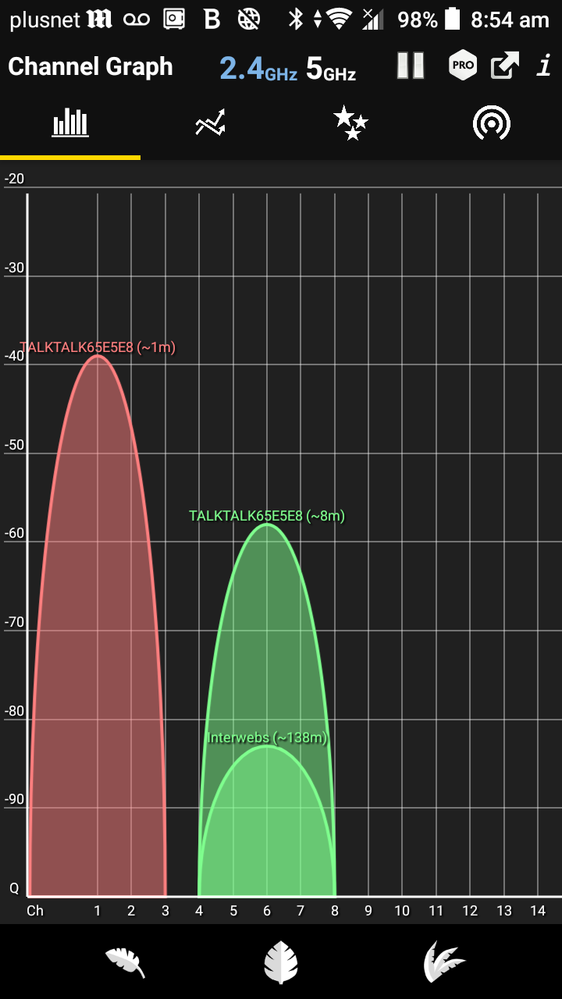 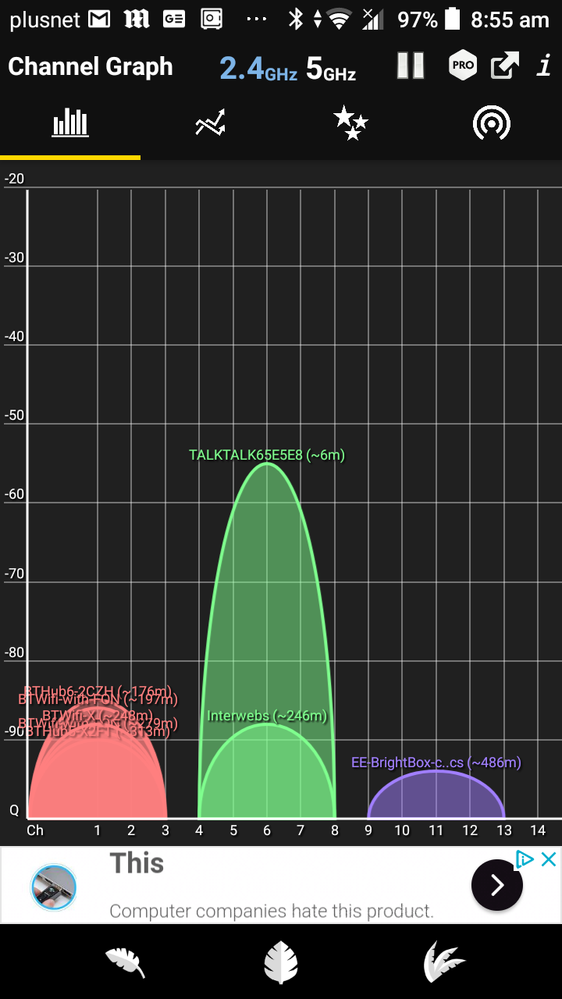 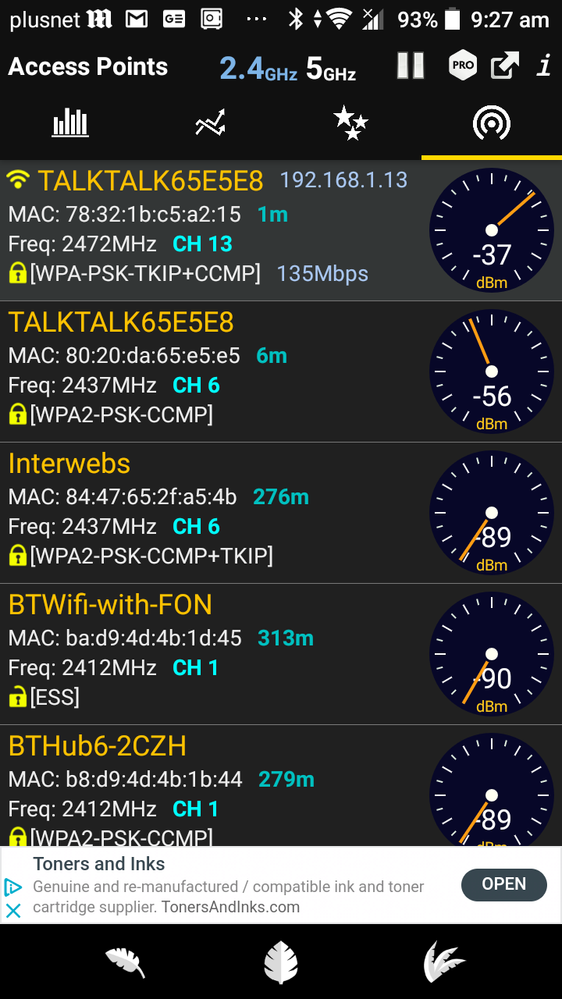 I don't know the analyser you are using, I am assuming it is an Android one. The trouble is that this analyser is not identifying the AP manufacturer, only the MAC address, which is only known to you. There is a much better one called "WiFi analyser" by Farc from the Play Store, which provides more information.

With the extender being on channel 13, I would suggest that this needs to be taken off auto channel allocation & set to a manual channel 11. This is because channel 13 should not be used as it interferes with other people who use channel 11. To do this you need to login to the extender's web interface, if you do not know how to do this, I can guide you through it.

Can you just run me through setting the extender to channel 11?

I have a web address from the Extender but it only takes me to a web search page where one of the list is D-Link?

Regarding the analyser I am using one from Google Play Store. I have looked for the one you refer to but all I have found is one by 'farproc' which does not appear to be identical to the analyser pages you show in your post?

Sorry yes it is the one by farproc, l will get back to you later with the extender stuff.

Hi Keith. I believe I have now done all you recommended. On access to the extender settings however the only way in was using the Extender IP address. The http access address did not work?

I think this now completes all I need to do unless you think I have missed something.

Please see below screenshots of the analyser details for the new channel setting. Many Thanks 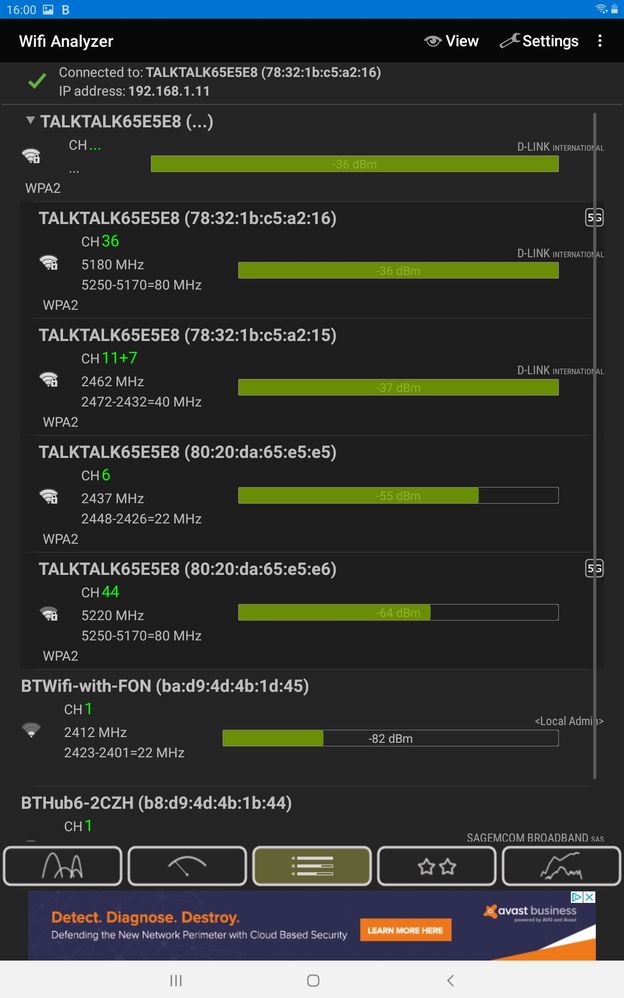 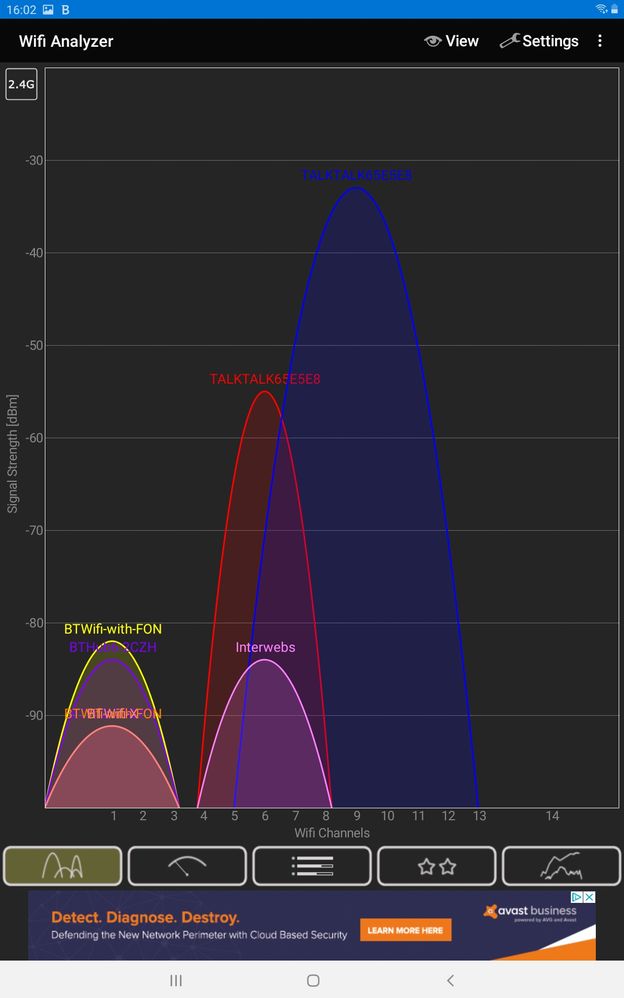 I was forgetting that you can't currently set the channel bandwidth on the extender, as it is using 40MHz bandwidth, you would be better to now set the router to use channel 1.