Hi folks, I got Future Fibre 900 installed the other day and the install went well, however, I'm not all that impressed with the tested speeds.

Any ideas what's going wrong and why it sometimes repeatedly tests so low?  And why I've never actually had it test at 900Mbps.

If the majority of the time it's under 500Mbos, then I might as well have gone for the 500Mbps package...

Ok, please let us know how you get on.

OK, so I have a set of Devolo Powerline/WiFi 6 Mesh adaptors brand new in the box that I ordered before switching to Talk Talk and was supposed to have sent back.

So I thought I'd get them out and use them for backhaul between the two Eero 6 Pros.  However, it seems to have made my connection slower somehow.  Until now I've had my PS5 hardwired into the upstairs Eero, which is connected via WiFi to the main Eero downstairs.  Doing a quick test of this setup today was showing nearly 700Mbps on the PS5 (which was surprising, as previously when I tested it I only got about 200Mbps!)

Then I hooked the upstairs and downstairs EEROs up to the Devolo Powerline adaptors and the PS5 started showing download speeds of only around 150Mbps.

Even connecting the PS5 directly to the Devolo adaptor only got around 150Mbps, so clearly it's the powerline adaptors that are the bottleneck here.  I'm just not sure why, as they're capable of speeds in excess of 1Gbps.

As they're fresh out of the box they all needed a firmware update, so I'm doing that now, but I'd have expected them to be capable of full speeds straight out of the box, even if they were not fully up to date.

We'll see if the update speeds things up...

Sure, it's not an ideal location, but I get full signal in the kitchen on both my phone and the TV.

I'll try moving it, but again, I don't think that's remotely related to the drop outs. (The TVs tend to connect to the upstairs Eero anyway, which has walls and a floor in the way...

Ok any metalwork in your sofa such as springs will hamper the WiFi and also being ground level is not a good idea. Can you raise it on to a table top or rest it on top of the sofa for the purposes of testing. I doubt people are hardwiring these devices at all, but just explaining why you do not get full bandwidth on a WiFi only mesh system. The Eero in my mind is a poor design and the internal aerials are small given the size of the device. It’s needs to be positioned in open space to have maximum effect.

No, I don't think there's anything blocking the downstairs Eero. I think both have full signal in the kitchen. The downstairs one is in the corner of the room behind the sofa at floor level, but that's about it. No electronic interference that I can think of, and network signal is pretty rubbish here, so it's not that, either.

The upstairs one doesn't have hardwired backhaul, it's effectively running as an extender, but I still don't get why that would cause it to constantly drop out.  Is everyone really hardwiring their their mesh networks to one another?  IMO that defies the whole point of having a WiFi mesh.  If you're running cables through the whole house then you might as well just hardwire all the devices?!

I have a good set of powerline adaptors still in the box that I'm tempted to set up for the backhaul between the two EEROs, but I'm skeptical that it'll fix the constant drop outs.

Ok WiFi won’t technically drop the internet. Are you able to check with a wired connection vs WiFi to check if the internet is still live when WiFi drops. Also do you have anything in the vicinity of the Eero near the ONT that could interfere with the WiFi. You mentioned that devices were connecting to the upstairs unit rather than the downstairs unit which would indicate a poor WiFi signal from the base Eero which would also result in the meshing failing.

Interestingly, my phone just told me that the WiFi wasn't connected to the internet a minute ago, so I'm starting to wonder if it just keeps dropping the internet connection somehow.

Devices seem to stay connected to the WiFi OK, but it seems like the WiFi constantly drops the internet...

(FWIW, the main Eero is sat right next to the wall-mounted modem with a short cable connecting the two, so I don't see that being the issue.

Have you tried separating the SSIDs. Some devices don’t like it when the SSIDs are the same for both frequencies especially if band steering is enabled. I don’t have Eero so not sure if this is an option.

The only way to get a true speed test is via the ONT directly.  Everything else carries overheads which impact performance. That said if the speeds are that low there is a serious issue somewhere.

Sadly, the problems are back again today.  I used the bedroom TV first and all seemed fine - connected quickly and started working.  Then my little girl decided she wanted to watch something different and as soon as I stopped the streaming it disconnected and then kept constantly disconnecting after that.  Then went downstairs and the downstairs TV did the same. Wouldn't stay connected for more than a minute or two.  In the end I gave up and switched the TV off.

What else can I try?  Otherwise I'd rather send these crappy EEROs back and downgrade to a lower package (since it makes no difference) and just buy a good mesh system.

Ah, gotcha.  Thanks.  See below.  This is what the TV always says in advanced WiFi settings when it disconnects.  It still seems to be connected to the WiFi,  it getting stuck at the DNS server stage.

That said, I restarted the upstairs Eero earlier and the TV then streamed problem free for a while. I also just switched on the downstairs TV and that just connected and has been streaming for a while now, too.

So maybe it's finally sorted somehow.  (Perhaps the Eero needed a restart after legacy mode was enabled?) 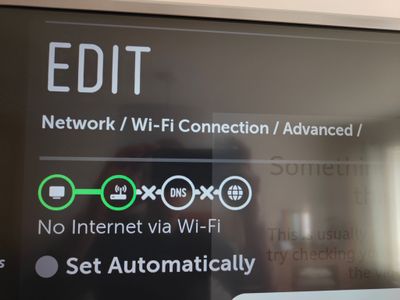 I tried putting fixed IP addresses, yes.  Not sure if I did it right, mind.

I also changed the DNS servers, as that seems to be where the TV is having issues. Didn't help though.

@RJUK123 Have you tried setting fixed IP addresses and/or alternate DNS servers for the TVs?

@RJUK123 photos, jpeg format,  can be embedded in the body of the post using the camera or image icon depending on whether you are using a computer or mobile device.

They cannot be attached.

Thanks, but at this point the speed isn't even the main issue.  It's the constant disconnections of the LG TVs in the kitchen and bedroom.  It's absolutely doing my head in.  To watch a 10 minute video I'll spend close to an hour fighting the TV and watching it in chunks, as it constantly drops the connection.  It's infuriating.

No issues with the Virgin Superhub nor the Asus gaming router I had before.  As I'm typing this the connection just dropped out yet again.

Tempted to plug the Asus back in and chuck the EEROs in the bin where they belong.

I just took a photo to show the error I'm getting, but apparently this forum doesn't accept jpegs for some silly reason?!!!

Eero meshing will never give you full bandwidth as there is no backhaul for the communication between devices, this means that the wifi bandwidth is effectively halved in order to mesh with other devices. If you want full speeds on a meshed network you need hard wired access points that use Ethernet for backhaul and the wifi bandwidth for users.

Hi. Will put my 4 pennies worth in.     First thing connect to the eero connected to ONT via your Android mobile and run the eero app. You can then run a true speed test.  What do you get in regards to Download and upload speeds.   Connect a laptop or other pc direct to ethernet port on the eero and run an app called ookla speedtest.  Run speed test and record download and upload speeds.

You will not get the true speed of your connection if you run tests via wifi connection.

Just tried this, didn't seem to work.  The TV dropped the connection within about a minute.

Weirdly, the TV I'm testing with is in the kitchen, but is connecting to the upstairs Eero, rather than the main Eero in the living room next door.

Any other suggestions please?

I have not tried that, no.  It connects fine, streams for a few minutes, then disconnects.  Sometimes after a few reconnects it stays connected for a good while, until I'm finished with the TV.  Other times it will just repeatedly disconnect for no apparent reason.  My previous router had both 2.4 and 5Ghz, so I doubt that would be the issue, but I'll give it a try.

If all this fails, am I able to downgrade my contract to a lower package?  As I'm just not seeing the benefits of these EERO routers, so I'm tempted to just get a better mesh system of my own. Happy to send the EEROs back, since they seem to be the source of the problem.

I'm sorry to hear this. Have you tried putting your eero into legacy mode? If you go into troubleshooting, select my device won't connect to my network, then enable legacy mode. This will disable 5ghz temporarily to see if it is an issue with the tv struggling to maintain connection. Please let us know if this helps.

Still having issues since moving to Talk Talk and beginning to wish I hadn't bothered when everything worked fine with Virgin.

Ever since moving to Talk Talk, two of my LG TVs just won't stay connected to the internet, which makes streaming content mind-numbingly frustrating. I gave up trying to watch a 10 minute YouTube video earlier after reconnecting about 10+ times.

The TV eventually connects, streams fine for a few minutes, then the video stops and the TV says it's disconnected.  I check the settings and it seems to be connected to the WiFi, but saying it can't get past the DNS server. After clicking connect a bunch of times it either reconnects or tells me the password is now wrong, so I rehenter the exact same password and eventually it starts working for another 2 minutes before disconnecting again.  I'm close to launching the EEROs out the window at this point.

Weirdly, the Samsung TV in the living room has no issues, although it is closer to the router.  However, the LG TV's aren't exactly far away either, and have 3/4 bars of signal, or full signal.

I can't really blame the LG TVs though, as they worked fine until I switched to Talk Talk.  It seems to be the EEROs that they don't like.  I have no idea why or how to fix it, but I suspect that Talk Talk support won't have a clue either, and will just do the usual time wasting of asking me to turn everything on and off.

Anybody got any ideas on my specific issue?