When will TalkTalk support IPv6

@LumKitty wrote:
Perhaps, but I was talking about an issue of perception, not a technical issue. Also an issue that could have been avoided if the entire industry hadn't been dragging its heels all these years!

Agreed, if IPv6 has been dual-stacked by ISPs 5 years ago prior to IPv4 address exhaustiion, then we'd have seen trouble-free dual-stack without CGN for years. Then when IPv4 CGN was introduced into the mix, it wouldn't look like IPv6 was the issue, and the remote server would probably be IPv6-enabled too to support all the IPv6 enabled clients.

The race to the bottom in terms of pricing means there's been very little money left over to buy routers with sufficient ROM and RAM to run anything other than the most basic IPv4 stack, and barely sufficient to upgrade the network when congestion sets in, nor pay for good customer service.

My other circuit is a "business class" FTTC service costing about £42 a month inc VAT, not including line rental. It never slows down no matter the time of day. I can watch BBC iPlayer or a Netflix movie in perfect quality without glitches or any buffering in the early evening when all my neighbours complain about their broadband.

I can get support 24x7, and none of this first line support nonsense and joining a ticket queue; I've had a senior technical person respond in the wee hours of the morning. But of course that costs real money!

The race to the bottom in terms of pricing means there's been very little money left over to buy routers with sufficient ROM and RAM to run anything other than the most basic IPv4 stack, and barely sufficient to upgrade the network when congestion sets in, nor pay for good customer service.

Irony is, ISP prices are now, if anything, collectively sliding upwards, not downwards - certainly from the perspective of line rentals.  😞

> Irony is, ISP prices are now, if anything, collectively sliding upwards, not downwards - certainly

> from the perspective of line rentals.  😞

well, yes, BT can make their retail ISP services dirt cheap by letting OpenReach jack their prices up, and thereby get all ISPs and WLR telcos to cover all their costs and make enough money to pay for the football deals

ISPs have begun marketing themselves as having better routers now. I guess consumers finally realised they'd been sent some cheap junk which slowed things down.

Many of the modem routers are dual VDSL/ADSL too, which reduces the cost when customer upgrades.

That said, I was sent a Huawei HG633, a worse model than the 635 used previously, and there are complaints aplenty about its relatively poor performance.

The 635 was pretty poor too. I ended up solving its issues by offloading all services except routing onto my Synology NAS and one of those free Merakis, so no DNS, DHCP, wireless etc. Not had to reboot it in months since doing that!

well, yes, BT can make their retail ISP services dirt cheap by letting OpenReach jack their prices up, and thereby get all ISPs and WLR telcos to cover all their costs and make enough money to pay for the football deals

Openreach's prices aren't continuously jacked up, and BT retail is far from cheap. Line rental on BT is always the most pricey in the whole country, and their broadband is not cheap either. Openreach charge £6.22 per month for WLR3 inc vat.

And quite probably is. It's trivial to manipulate accounting figures so that Openreach can be shown to be running at a loss when it's actually a very healthy income stream for BT (in the samw way that companies manipulate profit figures to reduce their tax liabilities)

There are _strong_ arguments for decoupling Openreach from BT. The New Zealand experience made it clear that what was preventing the lines company from being responsive and competitive was the fact that it was owned by the incumbent Telco.

NZ's govt achieved the split by making it a requirement for any further broadband funding. Britain's govt simply shrugged when BT didn't reach targets and threw more money without any strings attached.

The doom'n'gloom forecasts given by BT schills are sometimes word-for-word identical to the ones given in NZ as reasons for not breaking the incumbent from its lines division (right down to the pensions issues) and the reality is that the lines company is now extremely healthy whilst the incumbent is looking socker and sicker - one of the ironic things is they're now complaining that the regulated prices for lines access (which everyone pays) are too high - despite being set based on costing the incumbent supplied pre-split - and being half of what the incumbent was charging.

The lines company in NZ now actively seeks out customers and sells duct access to all comers, including every previous "competitor" in the telco market. In a UK context that would mean _immediate_ access to virgin cable everywhere, if Virgin wanted to do it.

BT has announced that by the end of 2016 its entire network will be able to use IPv6 - the next version of the net's core addressing system.

The change will eventually mean swapping the home routers of millions of customers as older devices cannot work with the new system.

Rival Sky has converted about one million customers to IPv6, and many mobile operators use it widely.

The net is steadily moving to adopt IPv6 because stocks of the older addresses have run out.

In a presentation to an industry conference, BT said it planned to "enable" IPv6 on half of its network by April 2016 and complete the transition by the end of the same year.

BT currently has about 7.8 million customers, and 6.3 million of those use its Homehub 4, which cannot currently work with IPv6.

BT said it was "looking at options" for how to upgrade that hardware to use v6 addressing.

As hardware is changed, BT intends to support both old and new addressing systems on its network to avoid disruption.

Sky said it was running extensive trials that had, so far, converted more than one million customers and staff to IPv6. The BBC understands that the majority of Sky customers should be switched over by early 2016. 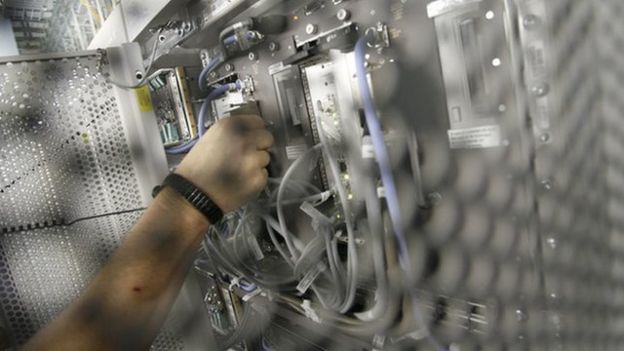 Adrian Kennard, who runs the A&A ISP and has been offering IPv6 for 13 years, welcomed news of BT's plans and wished it luck with the project.

"Our experience deploying IPv6 was that we did not find any serious problems and that it all 'just works'," he said. "Hopefully, other major providers will follow soon."

Mobile networks have been among the most aggressive adopters of IPv6, because the addressing system is widely supported on modern handsets.

"It's easier for the mobile operators to do this due to the nature of the smartphone devices they sell, and the rate at which consumers refresh them," said Dr Tim Chown, co-chairman of the UK's IPv6 Council and a computer science lecturer at the University of Southampton.

Already, he said, 30-50% of all the browsing that people do would be via IPv6, because widely used content networks and websites, including Google, YouTube, Facebook and Netflix, could be reached via the technology.

Few people would be aware they were using IPv6, he said.

Statistics gathered by Google suggest almost 9% of all the traffic hitting its network is IPv6. In the UK, about 2.6% of all traffic is IPv6

IPv6 is 20 years old today! Also my contract is nearly up and I'm otherwise happy with Talktalk, but will be leaving as I'm sick of faffing about running an IPv6 tunnel on a *@#][!![]'#[@#]!* Raspberry Pi

this thread has been going for two years and two months.

some of these domestic routers also have very low quality PSUs which degrade over time, especially if they don't get enough ventilation, which causes the router to become unreliable.

I have a Netgear WNDR3800 (running DD-WRT to become a wifi AP) which was a bit flakey; after replacing the Netgear PSU with a much better one it was much more solid. I'm about to replace that with an Ubiquiti Unifi UAC Pro.

coming up to two and a half years.

it wont be long before my year contracted to TT will be up and I can go to a new provider who's more forward looking.

In case anyone is interested, Sky have fully rolled out IPv6 now.

Am not sure if I posted this already

I think Sky's most "interesting" problem was upgrading all the many variants of installed consumer-side modem/router devices that didn't support it.

BT have been rolling it out, which will include PlusNet at some point (so all their v4-only-spoon-whittlers can whittle spoons with 128-bit precision).

Only Virgin Media and TalkTalk seem to be doing nothing.

I think Sky's most "interesting" problem was upgrading all the many variants of installed consumer devices that didn't support it.

On that point, when I plug in a device without IPv6 support it simply connects with IPv4.

I meant they replaced the modem/router in the customer premises; it's up to the consumer whether their devices support Ipv6.

Sorry, I mean if I plug in a router without IPv6 support it connects with IPv4.