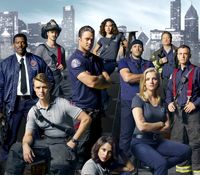 From renowned Emmy Award-winning Executive Producer Dick Wolf ("Law & Order" brand) and creators Derek Haas and Michael Brandt, the writing team behind "3:10 to Yuma," comes Season 4 of the high-octane drama "Chicago Fire" - an edge-of-your-seat view into the lives of everyday heroes committed to one of America's noblest professions. For the firefighters, Rescue Squad and paramedics of Chicago Firehouse 51, no occupation is more stressful or dangerous, yet so rewarding and exhilarating. These courageous men and women are among the elite who forge headfirst into danger when everyone else is running the other way and whose actions make the difference between life and death.

The pressure to perform on such a high level has a way of taking a personal toll, sometimes putting team members from the Truck and the specially trained Rescue Squad at odds with each other. Despite any differences, this is an extended family, and when it's "go time," everyone inside Firehouse 51 knows no other way than to lay it all on the line for each other. Lt. Matthew Casey (Jesse Spencer, "House") leads the Truck company, and brash Lt. Kelly Severide (Taylor Kinney, "The Vampire Diaries") runs the Rescue Squad.