Since last weekend ive been having drop outs 3 or 4 times a day and they last for around 3 to 5 min .  I was useing my own billion router , but was told by talktalk i should not use a after market router for there fibre ( load of rubbish ) My fible has been great from day 1 of signing up to talktalk over 3 years ago.On tuesday they sent me a D-Link 3782 and im still getting drop outs all my devices are hardwired i do not use wifi . They have booked a openreacharound to come this monday but its a waste of time as the problem isnt this end or the cabnet its talktalks end. Im not the only 1 who is having problems theres loads of posts on here and  i have meny friends who use talktalk after i told them how good its been and they are all getting the same problems and they are all over the uk , so it can not be my cabnet .  Also i was getting 77mbDL and 19.2mbUL ON SPEEDTEST for the past 3 and a bit  years , now my speed is only 56mbDL and 15mb UL since last weekend . Thats a big drop i think as im only  30 yards from the cabnet , i can see it out my window, when they layed the fibre cables the fella said i am 31 yards of fibre cable to the cabnet and will get full 80/20 .

Talktalk also did some tests but all came back fine and the script reader on the phone said next time you have a drop out to ring up so they can test the line WHAT A JOKE it will take around 10 mins to speak to some one at talktalk , then 5 mins to give them all the details then 10 mins to run the tests , the drop outs only last around 3 mins .

TALKTALK NEED TO TAKE THERE HEAD OUT THE SAND AND FIND THE PROBLEM ON THERE BT LEASED LINE.

On tuesday i lost over £1750 due to the DROPOUT i had a 11 fold bet on and went to cash out and guess what i had a drop out , 5 mins later when the internet came back on the other team had scored.

IF THE SPEEDS DONT GO BACK TO HOW THEY WERE AND THE DROP OUTS STOP BEFORE NEXT TUESDAY I AM MOVING TO ANOTHER ISP , SAME PRICE , SAME SPEEDS , AND UK CALL CENTER

The OCE's will pick this up during their normal Community support hours and will follow up for you.

Re: Router/ internet cutting out

@lee1975 wrote: Im with you on that ive the same problem check out y post on this page. If not sorted i am moving to a new isp and not paying talktalk a penny. They can take me to a deb collector but i will offer £1 a month. By LAW they cant turn that down.

I'm really sorry to hear this and please let us know how the connection compares following the engineer visit and if you still need any assistance via the Community.

I will , but i would say it wil still be the same as this problem is happeneing all over the uk and started around the same time , so i would put my money on it not being a problem at my home or cabnet .

Ok thanks. The engineer will be able to feedback there finding to our Network Team if they are unable to locate a fault on there equipment. Could you bump your thread after the engineer has been and we can check this with our Network Engineers?

Had a call 15 mins ago the person was making out he was from BT and said i had a virsus on my network and i needed to go to a website to fix it .
Funny thing i reported a network problem to talktalk over the weekend but it wouldnt be BT ringing me and he didnt ask for my name address or anything .He told me to load up my firefox or IE and type in a web address were the page will find the problem on the bt system , lucky im not thick and guessed it was a con from the start  After playing along with him for 20 mins  and saying yes im doing all that but the page will not open or my antivirus is stopping the page he told me to turn the anti virus off also firewall  .I then asked him who is my isp and reply was its on the BT network ,jtalktalk ee sky ect he also said virgin was on the BT network umm dont think so fella ,  my reply was NO im not on the bt network i use wifi satalite internet and said to him that he was a con man trying to put key loggers on my laptop and he hug up .

TALKTALK HAS A MOLE AND GIVING OUT NUMBERS , WHATS THE ODDS ON REPORTING A PROBLEM THEN 2 DAYS LATER GETTING A INTERNET CON MAN RING YOU .HAS ANYONE ELSE HAD THIS CALL ???

OPENREACH has now been , he tested my line and that was 100% perfect

The only thing he has done is fitted a new faceplate ( nothing wrong with old one ) also fitted a data cable box in the my bedroom .

He said the way all my cat5 cables and router is set up is correct part from having the router plugged into the wrong faceplate in the wrong room , but he did say its worked fine for 3.5 years so the problem is not that and its it problem with talktalks network .

After 5 mins of the openreach guy being here i had another phone call from a con man saying hes from BT and theres a problem on my line , so i replyed lucky you called the BT  open reach guy is 4 ft away i will pass you over to him  but by the time the open reach guy had my phone the conman had hung up . in 20 mins i had 4 calls from the con men .

I spoke to the openreach guy and he said this has happened loads of time and he even said theres someone who works for isps or openreach who are selling customers numbers who have problems to these con men .....

I will give it a week and see if i get any more drop outs , my download and upload speed has now gone back to around what it used to be . Im useing my billion bipac 8800NL router again as i was told theres nothing wrong with it unlike what the talktalk person i spoke to told me. ( they said i have to use the talktalk router as aftermarket routers dont work)

Ive upoaded a photo of what he has fitted in my bedroom ..  small white box above the plugs .Also added screen shot of some speedtests with the billion router hardwired. 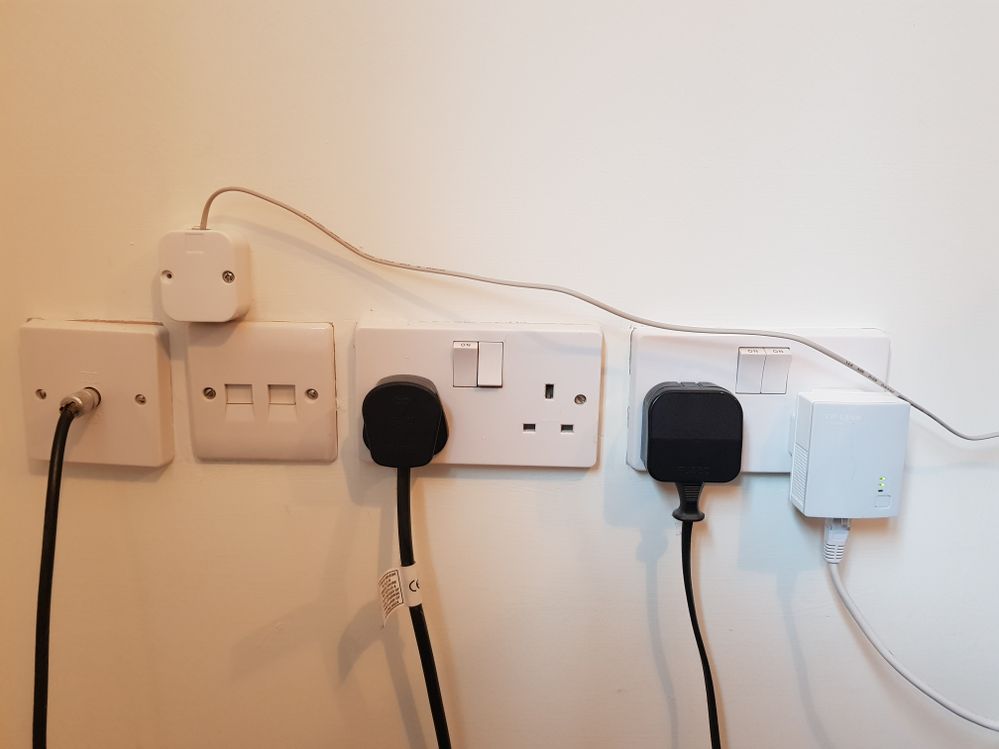 Thanks for the update

Regarding the scam calls you can report the number here. Please also check out our CallSafe feature

yesterday they were still ringing at 8pm and started again at 7.30am this morning 3 calls so far they are trying to get me to type a cmd   ( eventvwr )

Its just funny that these calls started after a openreach booking was made ..

I've received similar calls and not reported a fault at the time, it seems like they try a few times and then move on to new numbers, If you use CallSafe this should stop the calls getting through.