So i got UFO installed recently ,Below is a screenshot of the average speed i am getting .

This is a wired connection to my pc that is up to date .When the engineer tested the connection on his laptop it stated 1.2GB .This is clearly not the case now.

I have tried several reboots of my pc and the router but nothing changes with the speed.

The average speed that i should expect is at least 400mbs according to talktalk advisors .

I may as well be still on the faster internet down the phone line of which i was getting speeds of 63mb average .

can anyone advise please.

Just to add the faster speed test which was done using the wifi on my phone .From the site Fast.com.

Very strange how a wired connection is far slower than wifi. Seems to me that there could be issues with the router . 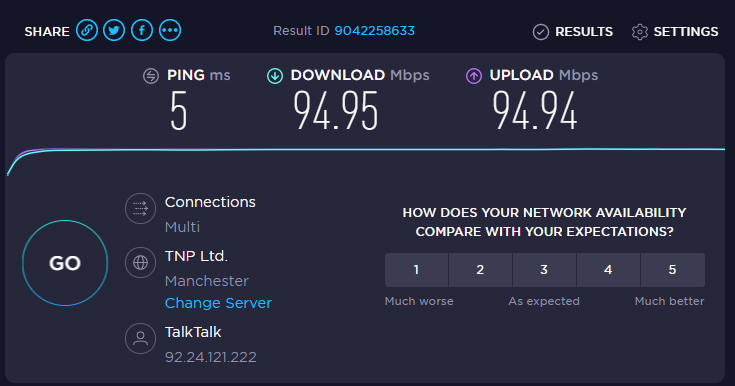 Not all test servers cope well with high speeds, try the fast.com tester on a wired connection.

As I said in the original post I have tried that website with my wired connection and the results are exactly the same give and take 1mb here and there.
I also tried my laptop using the wired connection straight from the white box on the wall bypassing the router with the same results 95mbs.
Hope this can be resolved
M Nettleton
1 Like
Report Inappropriate Content Reply
Highlighted

OK, I have flagged this up to the support team for you, they should pick this up tomorrow. Make sure that your personal details are complete on your community profile here so that they can link your forum identity with your account.

Thank you very much .
My profile is up to date
Hopefully will get this resolved soon . I will update when I get any news.

I've had UFO for a few months and have always got 1.2 Gbps using fast.com on a wired PC.

As I can see that you have wired directly to the white box (ONT) and still get the same results, I've got a few questions :

1. Have you got more than one wired PC? - if yes, can you please try copying a file from one PC to the other and tell us what speed you get (it should be around about 100MB/sec if everything is working correctly.

2. Have you ensured that you have the latest network drivers for your network card in your PC?,  i.e. have you got to the suppliers website and got the latest drivers?

3. Have you checked that the link speed of your network card is set correctly?   The best option is Auto-Negotiation or 1000mbps.   There is a page here http://www.qdpma.com/dupwindm.htm that helps you find the setting in Windows 10 (if you are using another windows let me know and I'll get another webpage for you).

Please see reply in other thread.

There is really nothing wrong with UFO, only that it tests the capability of older hardware that cannot cope with the UFO speed, UFO is really ahead of times.

Older 10/100 hardware is the bottleneck on UFO, old PC's and cheap laptops with 10/100 restrictions is normally the issue.

More to be said about the talktalk forum software that keeps bombing out when I try to reply to people, however today, it appears to be working. A lot of my replies to the UFO section have been lost over the last several months I have tried to reply and help!

I have exactly the same problem as you, it is very annoying when you type a long reply, it errors and then you've lost it.

I've taken to copy and pasting my reply into a notepad just in case before I submit the post.

Glad it isn't just me experiencing the issue, I used to be a community star/moderator here, but got dropped, probably because of my lack of replies and help, this was due to the crappy forum software bombing out on me.

Over several months I have done the same and spent a long time replying to a post with a long detailed response, to then find it lost with an error message after I click on "Post". Then I just gave up.

Hence why I have not contributed much recently.

Sorry for the delay. Have you spoken directly with our dedicated UFO Team regarding this?

Just wanted to let you all know that my issue with internet speed or lack of has now been solved.

All i did was change the CAT 5 cable to a CAT 5E , instant success .Now im getting speeds of 1.1GB .

Thank you for the replies regarding this issue ,