Get answers and information about our security products.

Turn on suggestions
Auto-suggest helps you quickly narrow down your search results by suggesting possible matches as you type.
Showing results for
Show  only  | Search instead for
Did you mean:
Options

I turned on CallSafe last week and when I did it supposedly transferred all the number from my blocked list on the CallSafe blocked list. However, it showed then all as "Withheld Number". I phoned up about this, but was told this was normal and it would still work.

This week, I decided I ought to add a few contacts to the Approved list so they don't have to go through approval. But after adding 4 numbers, they are all showing up as "Withheld Number". I was going to go back and add the names, but can't tell which number is which.

I can't see any settings to control this and anyway, why would anyone want to hide their approved numbers, so have to assume it's a bug in the web site. 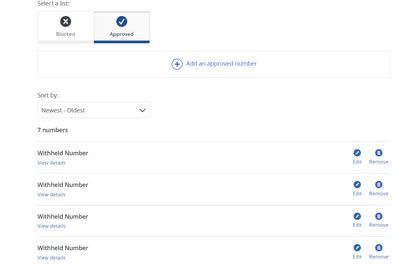 Hi StarNamer, if you've got ideas on anything including how to improve one or more products use the your ideas forum. The ideas provide are always passed on to the relevant product manager and their response will be posted.

Please log in to My Account if you need to view or pay your bill, manage boosts and track your usage. From My Account you can also check your connection and test your line for any issues in the Service Centre.

thought you'd like to know you are not alone!

My complaint so far is simply an email to concerns@talktalkplc.com as it was the only complaints email address I could find on the web site. I've previously looked on the website to raise concerns about it but it seems that TalkTalk would prefer to direct people to this community discussion forum rather than provide proper channels of support.

To be honest, I'm not surprised that CallSafe editing doesn't work on the web site as I've often felt the whole site poorly written with little coherence. I get the impression that there are at least 2 teams working on it, one on the 'marketing' pages and one on the 'account management' pages and the 2 are not well coordinated. Additionally the forum website seems to be written a 3rd team (or perhaps bought in and customised?).

In any event, navigating the main site does not give a good experience as I feel I am being shunted back and forth between the public marketing site and the private and controlled 'account' site, often having to login repeatedly as it switches away from the public site. If the corporate sites I've worked on did that, the users would be logging complaints every time it happened! Most have come to expect Single Sign-On across all company websites.

An example from earlier today was that when it started notifying me via a popup that my contract due to expire in just over a month, I tried following the various Renew Contract links to see what the price would be, but every time it took be to a marketing page for TV boosts with no obvious way to proceed except by select a TV package I don't want. At first I though I'd clicked an adjacent link, but when the 3rd attempt took me to the same place, I guessed it was working as intended. Then, when I tried to navigate to the accounts page, it asked me to login again!

While I can understand that CallSafe was rolled out quickly in response to the data breach of a few years ago, I would have expected that by now some effort would have been put into making it more usable.

With regards to call blocking, I've actually been happy for some time with a combination of the old number blocking system along with caller id and screening of callers by answerphone. I had expected CallSafe to provide better features and more control. But it seems that it doesn't give anymore visibility to numbers I've blocked and the fact I can't check who I've added to the approved list makes that almost useless. If I ever wanted to remove someone, I would be able to identify the number so would either have to contact someone at TalkTalk or delete them all and re-add them! That doesn't seem to me to be a customer-ready application.

I suspect that unless I hear that it is going to be improved soon, which you say seems unlikely, I will turn CallSafe off and revert to the old system.

Apologies that this has got rather long, but since I have spent a lot of time working on web sites I tend to get irritated by what appear to be badly implemented sites.

If you do a search of this forum you will see many similar comments.

I for one said when trialled said it should not go live without full editing, but it was at the height of phone scams following the data breach and it was, I understood, felt that the benefits to customers outweighed the issues.

I can say I have not had any nuisance calls in all that time, so for me, it's a case of it's just there in the background when I gets new caller phoning who introduced themselves.

The other big negative is the inconsistent way it works with voicemail.

If you have made a complaint, is this to the CEO's office? If so then staff here will no longer be able to comment as you will be allocated a complaints manager as a point of contact.

Since my contract is up for renewal in just over a month I had a look at other packages. Unfortunately, none of them match TalkTalk's broadband speed for me.

So I looked at other features on my account and noticed I had only 2 numbers in my Calling Circle. I tried to add a 3rd and got a message that my Calling Circle could not be updated, please try later.

I can't believe the service from TalkTalk is this bad!

If it wasn't for the speed, I'd switch.

Re: "staff here have been helpful in unblocking numbers blocked by mistake."

How do you work out what number you've entered by mistake when you can't see what you've entered? On Sunday afternoon, I was working my way through my contact list adding numbers, and wanted to check where I was up to, and then found I couldn't see the list of approved numbers!

I assume it does tell me if I enter a number that's already on the list? Or is it even more broken than I've seen so far?

1 Like
Reply
Options
StarNamer
Conversation Starter
In response to fr8ys

I've sent an email to start the complaints procedure.

I also notice that my contract is up for renewal in just over a month so perhaps it's time to start looking for a phone/broadband provider who has a decent customer service department!

I really can't believe that other customers haven't complained about this. Perhaps nobody uses it!

1 Like
Reply
Options
StarNamer
Conversation Starter
In response to fr8ys

As I said, I have done a web development in the past and if I wrote code that worked this badly I'd have been rightly told to fix it ASAP!

There must be some way to escalate this. The main reason I moved from Call Barring was that I expected to be able to see the blocked numbers. Not being able to see approved numbers is beyond stupidity!

Having been a very early adopter of Call Safe, I too used to get annoyed that I could not see who I had added to my approved list.

however it is a long time since I felt the need to have a look or manually add anyone to the list.

I went through my address book early on and added those. I sometimes came across a number already registered by TalkTalk as one of my regular contacts.

new contracts I now await them to phone me and add by hitting 1.

I inadvertently hit 3 on one number by mistake and @Ady-TalkTalk managed I delete this so next time I could accept the caller.

I know it sounds frustrating, but once you have used it for a while, and see the benefits of no nuisance calls, you will hopefully just be able to let it look after itself.

If you find it too inconvenient then you can always turn it off.

I should add this is my own personal view and not from TalkTalk as I am a customer, like you.

So how do I find out what numbers I have blocked or approved if I can't see them?

The fact that you think that a reply which basically says "TalkTalk know about this but can't be bothered to fix it"  is a sad indication of the poor quality of TalkTalk customer service and support.

I've worked in IT for 40 years with many years as a web developer and if any site I supported ever got a report that values were not being properly displayed to users, it would have got top priority and been fixed in days if not hours!

I don't suppose there's any way to escalate this some someone in TalkTalk who might actually care about customers and push for a fix?

Or am I expected to accept a broken web site and complete indifference?

Hi StarNamer, you've been given a great answer by fr8ys. Please let us know if you need anything more.

Please log in to My Account if you need to view or pay your bill, manage boosts and track your usage. From My Account you can also check your connection and test your line for any issues in the Service Centre.

It's a known issue and been like this for a few years now.

it's unlikely to be fixed anytime soon

as you have been advised, once they are input or accepted the system knows they have been added.

personally I've given up trying to get it to work and just accept that Call Safe works as I want it to, by accepting or blocking callers.

staff here have been helpful in unblocking numbers blocked by mistake.