So, I have a couple of questions:

It would be nice to get some clarification.

I'm a bit confused. have you cancelled the boost or not?

If you are keeping the boost and would have kept it anyway, then financially you're in the same position you would be in if you had received notification. The only difference is that you wouldn't have got a surprise at your bill going up by £1 this month.

Near the top of each of the pages on this forum there is a search box. If you type something like "chat" or contact" (or similar things) the first search result will be a link to the page with all the contact details, phone and chat opening hours etc. Not really that difficult to find.

During out text discussion they did offer to remove the boost and I did realise that was the only option, but even at 50% it's valuable because I don't think I can wean my partner off the landline.  They didn't however mention that if I then wanted it back I would lose the discount, and anyway all I'd really have liked would be to be informed in advance.  One would have thought that maybe the best place to notify people would have been on the previous bill, since they must have known by then that they were going to do it.  On the whole their communications are not good and what's more it is very hard to find any way of communicating with them on their website.  One would have thought that a company called talktalk would welcome actual talking.

TalkTalk will likely say that they sent notifications to everyone, either by email or letter, so unfortunately it's probably a case of your word against theirs if you say you haven't received it. I'm still not sure why they sent me a letter through the post - I never got an explanation for that.

In any case though, your only remedy, if you don't agree with the increase, is to cancel the boost.

You are lucky to have been told, even if it is irrelevant in your case.  I first found out on getting my bill (I'm on a half price deal), and after a lengthy text conversation with talktalk they say they can't remove the increase because they sent a notification email on 17th June, which I never received despite the only email they have for me is a talktalk.net one.

Many people will think twice about keeping this, particularly if they can use limitless calls on a cheap mobile tariff instead.

Indeed. The only reason I still have it is because they offered it free.

However you add it up, it's way ahead of inflation. Averaged across 3 years, 20% per year, when inflation was next to zilch till last autumn.

Many people will think twice about keeping this, particularly if they can use limitless calls on a cheap mobile tariff instead.

December 2020, it was this wording. Similar to this year's at the start, but with a useful clarification included below.

This year's notice is definitely a step down in standards of clarity.

Don't they check their own best practice? 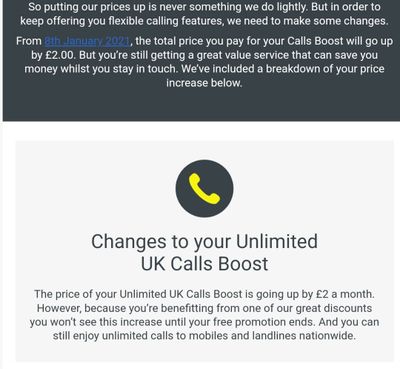 Hey @AllyM @Gliwmaeden2 thanks to you both, that message clearly is remiss in its wording.

An altogether clearer presentation of the situation.

The letter is indeed the same wording as @Gliwmaeden2 has posted from some electronic source. 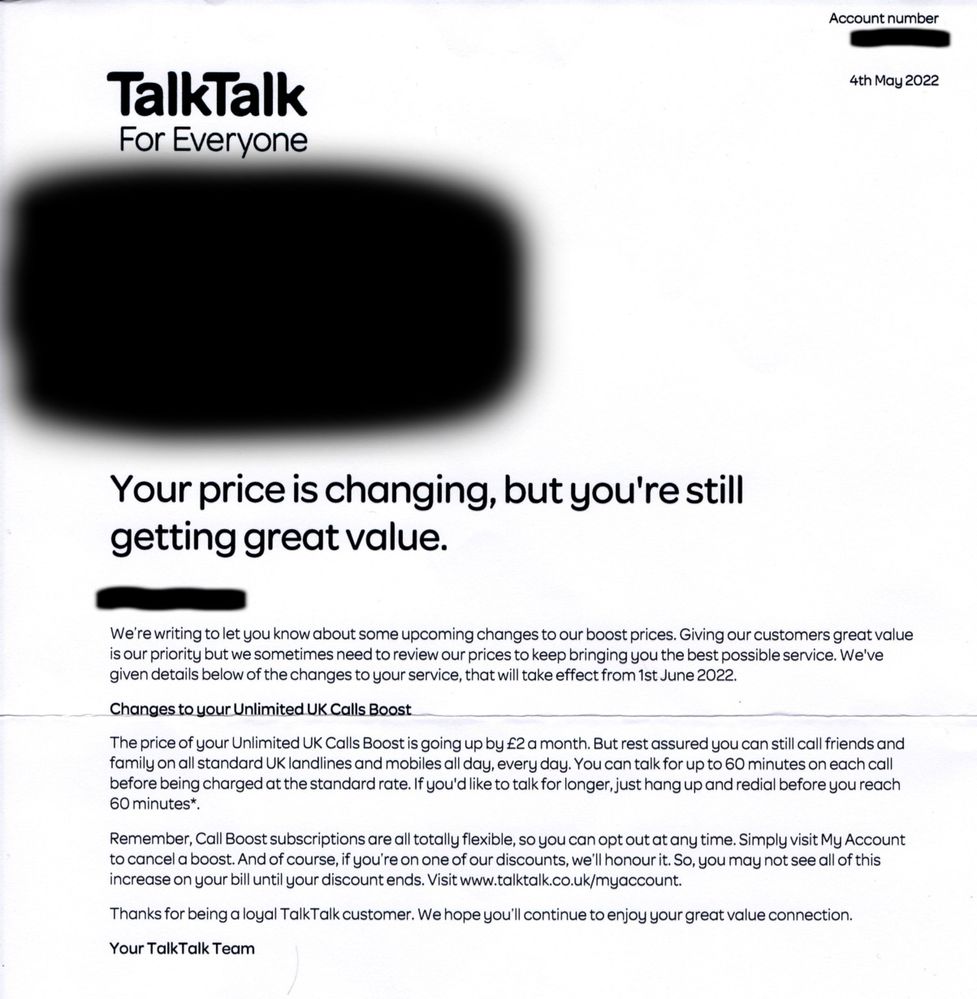 Yes, the addition of a statement to clarify that existing deals/discounts would be honoured would be better, but the ideal scenario would be a properly personalised letter (or preferably an email) detailing how a customer's individual circumstances are affected.

I'll see if I can dig out the notification from the last time it happened, to see if this is a significant change, @ferguson.

@Gliwmaeden2 And it doesn't go on to mention anything about existing discounts/offers being honoured?

@AllyM, Arne posted a reply to a similar question earlier today.  You don't have anything to worry about:

But yes, the wording is very poor indeed.

@Gliwmaeden2 I have seen that. I am talking about an individual notification as the OP has received. 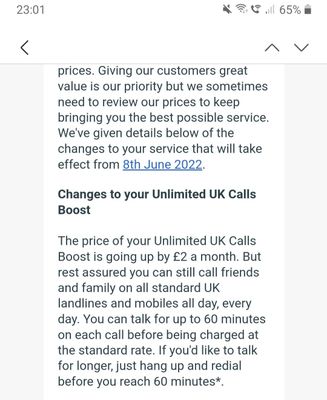 Just caught up with the flurry of communication!

That price increase kicks in in June.

It can't affect those customers who have been promised it free for the lifetime of the contract - but it's the boost we have subscribed to, @AllyM, so, as @fr8ys, says, Talktalk has to tell you what the full subscription cost would be.

It's all detailed here, together with other price rises:

We all get told of a change even for simply the cost of making ordinary phone calls, despite having the boost, because of similar requirements.

Better than not being told, like the charges for renewing prior to the last 90 days of the contract! Several years ago now, but it was a change from the original fixed price model, and people sometimes get caught by that one, having never been officially informed when that change was introduced.

I reckon that Talktalk is doing it's best to  make things a little more transparent.

@AllyM Can you post a copy of the letter, suitably redacted for any personal information?

I am in the same position as you, but I have not received any notification yet, I guess it will come nearer to my billing date which is later in the month.

I confidently expect my free Boost to remain free for the duration previously agreed.

First, its a legal requirement to advise customers.

In the past they have advised of other price increases by email, such as the infamous one last year with the breaking of the fixed price promise and implementing the annual increase structure etc, so why not this one?

If it was a promotional free boost, it should remain until the offer expires. Mine has.

I was thinking that would likely be the case but if so, why not make that clear in the letter?

It states that "your Unlimited UK Calls Boost is going up by £2 a month".

I like to think I have a reasonably good grasp of the English language and that wording to me suggests a personal statement that my boost price will increase from £0 per month to £2 per month. If that is not the case then it is very poor communication.

First, its a legal requirement to advise customers.

If it was a promotional free boost, it should remain until the offer expires. Mine has.