Tell us what
you think

Not all formatting tools available

When accessing the forum from my phone (Brave browser on Android 10)  and making a post not all the formatting options are available.   As can be seen from the screen shot below there is only row of options:

I am reasonably sure a second row appears briefly but disappears under the edit window.

Hi Birchcroft  this is apart of the automatic anti clutter editor, essentially the smaller your screen the less you'll see, not too dissimilar to the old site which did something similar

Hey @Birchcroft  in some your logged in and in others your not, this is the source of that inconsistency as the default editor that everyone sees is a basic one.

@TheHornedOneI'm begining to think you may be getting a peverse pleasure from pointing out what appears to be the endless variations in the way icons are displayed/not-displayed😁😁😁  I might as well but I think it may be begining to fry my brain.

I do indeed have access to a PC,  rather than a MAC.  The answer to your question of what I see depends on how I look, and while looking I discovered a few more quirks,  I'm beginning wish I was still working on embedded or bespoke systems as they are much less hassle😁

If I use Edge, which I don't usually do, then I see: 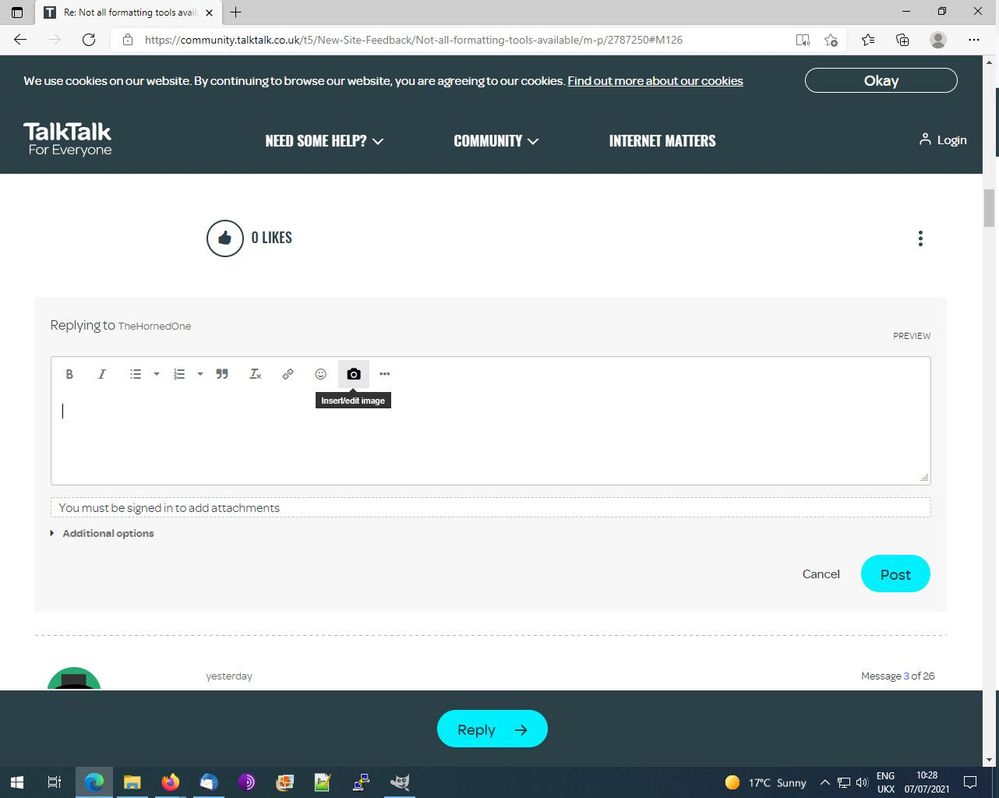 However if I use FireFox I see: 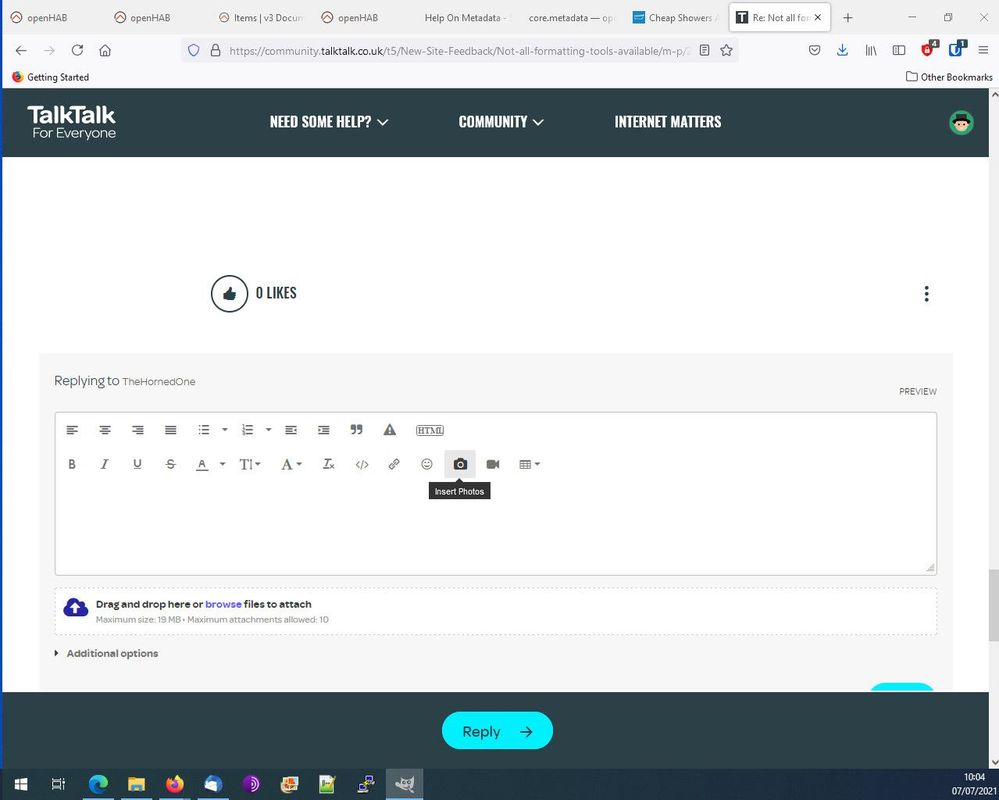 Not only do I notice the different captions on the Camera Icon but also as with your screen shot the Video Icon is absent as in Edge.

If I want the 2 rows of icons as shown in your screenshot I have to click on the three dots ("Expand toolbar") to see them, once this is done there appears to be no way to colapse the toolbar again.

If that is not strange enough for you then shrinking the browser window just adds to the anomalies.  If I shrink the window without first expanding the toolbar to 2 rows I get a new "Undo" Icon appear: 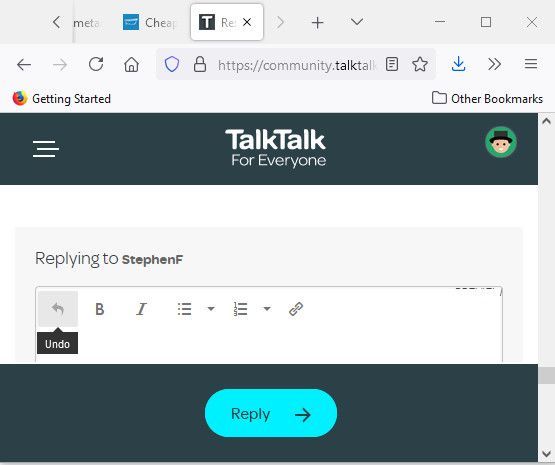 If however I expand the toolbar to 2 rows before shrinking the window I get: 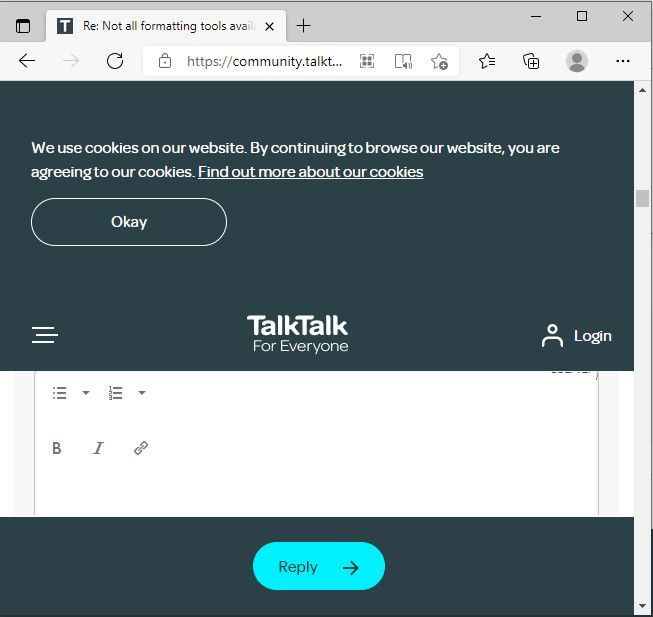 So basically yet more inconsistancies.  Not really a good advert for the firm developing the site.

@StephenFWhile I can appreciate the need to de-clutter smaller screens it would be nice if there was some consistancy in the displays across platforms and as I have mentioned previously rather than removing the options it would be better if they were placed in a dropdown or at least do as you do on the PC and have an expand toolbar option.

Hi @Birchcroft  this is apart of the automatic anti clutter editor, essentially the smaller your screen the less you'll see, not too dissimilar to the old site which did something similar

All of the screenshots I posted are ex tablet @Birchcroft: Amazon Fire / Samsung Galaxy / Apple iPad - although not necessarily in that order - and notwithstanding the one exception as stated previously, using a version of the Firefox browser.

The iPad is the easiest to use for a number of reasons, including it's superior speed, but all posts here were compiled using an iMac 21.5

PS ~ Here is another interesting little icon conundrum.  If you have access to what Community Star Gondola quaintly refers to as a PC, what do you see when you hover here ............

@TheHornedOne certainly quite a few interesting differences and I notice that it is only the 2nd dump that does not have the picture and video insert icons.  Does that mean the top/1st is a screenshot from a tablet?   Given the differences I would be tempted to think that the screenshots come from 3 different developments rather than a single system adapting to different displays☹️

With the 'Insert Photos' option non existent - as you advise - it is little wonder posters have a problem embedding a graphic!  Additionally, in the bottom [mobile device] portrait option display, the two rows in the toolbar are further apart, which is exactly what is NOT wanted, working in an already limited space!

What next I wonder!

@TheHornedOne I have now also tried the Opera and Kiwi Browsers on the Huawei T5 and can still only access the mobile version of the site (landscape and portrate modes) so I guess it's screen must be just below the desktop threshold.

Another thing I've just noticed is that based on your screen shots the desktop editor does not include the picture and video options that are available on the mobile site.

PS ~ I am working on the Firefox anomaly!

Amazon Fire / Android 5.1.1 / Firefox Mobile 89 ~ I am pretty sure that the delays I am experiencing with this application @Birchcroft, are down to synchronisation; it takes forever to complete, but the reduced toolbar in portrait mode still exists anyway!

I [re]installed the Firefox Browser application - to unsure that it was up to date, in all respects - but the TalkTalk Community website would not stabilise, so I used Silk.   Same result .........

........... I.E. okay in landscape only, so I guess that moves the size range to above 10.10 in - Getting rid of that stupid great, unnecessary Reply duplicate banner would be good!

PS ~ I am working on the Firefox anomaly!

@TheHornedOne I have tried Brave, Chrome, DuckDuckGo, and Firefox on my Motorola G7 but based on what Gondola has said it is not surprising that they all show the "mobile" site, even when the use Desktop option is selected.  I've also tried Chrome and Firefox on a Huawei MediaPad T5 which has a 10.1" screen (the old way😁) with a resolution of 1920 X 1200 which still displays the "mobile" site so I guess the changeover between mobile and desktop must occur somewhere between 10.1" and 10.4".

TheHornedOne  Given that the format used depends on screen size then you are running your Android/Firefox combination on a "large" screen device such as a Chrome Book rather than a phone or 10.5" Tablet, is this correct?

On the assumption that you are referencing measurements 'the old way' Birchcroft, 10.40in [Samsung Galaxy Tab S6 Lite] so I guess the answer to your question is no!

I do take your point about generating, and formatting, a post in landscape though, 'cause that is a serious fail, but something which has come to my attention, is that by comparison, the Firefox browser displays noticeably larger than others ..................

The banner Reply button is active in Linear format only. In Linear format there was no ability to reply to or quote from individual posts but that omission has been overcome by adding an individual reply icon to each post. The issue of the banner Reply button taking up space and not being suppressed when the editor is active is on the bug fix list.

The new Khoros software offers Threaded and Linear formats to suit individual preferences. The transfer from the previous hybrid format is challenging. Improvements as you can see have already been made.

Thank you for your help.

@Gondolaanother suggestion, as I believe has been made before, is to get rid of the big reply banner.  Particularly when in one is already typing a reply such as now, athough interestingly it does not show up on screen shots.

@TheHornedOne  Given that the format used depends on screen size then you are running your Android/Firefox combination on a "large" screen device such as a Chrome Book rather than a phone or 10.5" Tablet, is this correct?

The mobile mode is triggered on the display viewport size.

As member csquared2 said, as you reduce the display size on a PC you'll see the format change from desktop mode to mobile mode. It's obvious from the TalkTalk header which mode is being displayed. The mobile header has the triple line designer burger with the filling spilling on the top left.

So even if you select the desktop browser version on your mobile you'll still be in mobile mode because the display viewport hasn't changed.

What would be helpful to push this discussion forward is to know what are the must have editor toolbar icons and functions.

Obviously the answer to that question is subjective.  But from my point of view as a start I would go for:

@Gondola can you explain why @TheHornedOne  gets a different/fuller set of formatting tools (Message 7) to me when using the same version of Firefox on Android?

'Birchcroft' wrote:...why they choose to remove options in the mobile version rather than, say, move them to a drop-down.

Community is running a new version of software provided by and hosted by Khoros. The functional design is by Khoros with a skin developed by TalkTalk to match its new look website design brief.

So there are two aspects that TalkTalk are dealing with. Getting to grips with the newly released software and making that work with the new look website design.

The limited set of editor toolbar icons and functions when the display drops into mobile mode is similar for other organisations running the previous versions of Khoros Community software.  So 'they' that you refer to is Khoros and to get functional changes may depend on Khoros.

What would be helpful to push this discussion forward is to know what are the must have editor toolbar icons and functions. You've mentioned having a drop down menu for selection of editor toolbar options. Any other suggestions / ideas?

Strange I've tried it with the same version of Firefox on a phone and tablet, both Android, and what I observe is that the full set of icons appear briefly and then disappear leaving the reduced set as in my screen dump.  I've even tried selecting the desktop option.  So given your experience and @Gondola's comments I am having difficulty (1) why it should work for you but not others. (2) why they choose to remove options in the mobile version rather than, say, move them to a drop-down.

Which browser are you using?

There are two modes, desktop and mobile. When the display width is reduced the content is formatted for mobile.

In mobile mode there are a reduced set of editor icons, by design.

Well done for spotting that the artifacts are the top of the PREVIEW text link.