The unbeaten 27-year-old will make the second defence of his IBF title against Molina, who stopped former world champion Tomasz Adamek in his last fight in April.

Besides the main event we also bring you some great boxing matches such as : 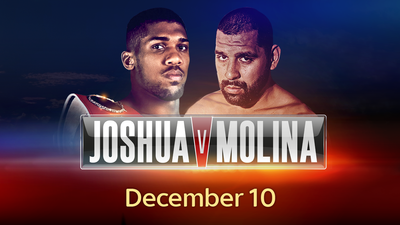 Hi, For info, this was quite straight forward to setup, just select TalkTalk channel 416 and follow subscribe instructions.

TalkTalk have already added the cost to my bill.

However, note, even though TalkTalk have improved the image quality of the other Sky Sports channels they have not upgraded the BOX OFFICE channel. So, we were disappointed with the image quality (which must be SD quality). If watched on SKY this would have been HD as standard for an extra £2.

However, it was a great nights boxing 🙂

Question for TalkTalk – can they feedback image quality improvements to Dido.

Also, I was surprised this Event was not better advertised on TalkTalk website and I only chanced upon it. Any reason why?

Marvelous Marvin Hagler vs. Thomas Hearns in 1985 was 3 rounds of non-stop action and eight minutes of mayhem.

Hagler won in the 3rd by KO.

Its definately up there for me 😉

Just clarifying. Is the Joshua vs Molina fight on TalkTalk PPV?

Hope to hear from you soon.

Hi , I am just confirming. Is this PPV available via talktalk?

If so, how does it work?

There have been so many great fights over the years, from Ali's Rumble in the Jungle, to that 'biting incident' between Tyson and Holyfield....

Love to hear your favourite bouts or boxing memories.