Broadband speed degradation in the evening

I've had an issue every evening for the last 12 days with my Broadband speed. Prior to this, my speed was pretty good all the time. Between 7 and 8pm (a couple of times, slightly earlier), the speed will degrade from around the guaranteed TalkTalk speed in my contract, to around 2Mbps. It will remain like this (sometimes less sometimes slightly more) until around 11pm.

There are 2 of us in the property and, as we are retired, our internet use doesn't vary much during the times we are in the house. We watch quite a bit of catch-up TV on our Smart TV (WiFi connected). This was how we first encountered the problem (i.e. Buffering iPlayer, poor picture quality etc.). I honestly can't think of anything that happens differently at this time in the evenings to other times in the day when all is good.

I've had 3 "Chats" with the Technical team. The latest was this evening while this issue was happening. The advisor tried a few things (router reboot, turning off all devices..) but nothing made any difference. The advisor confirmed that from their tests, the speed to the router was good and in line with guaranteed speeds.

I asked the advisor to explain this aspect but they could not, just apologised.

I have reluctantly agreed to a Engineer visit because I felt I had no choice, but am worried that they will find nothing amiss and I will be out of pocket by £50! Can anyone reassure me about this (i.e. they may still be able to diagnose a problem outside of my control)?

Some screenshots of my speed tests. 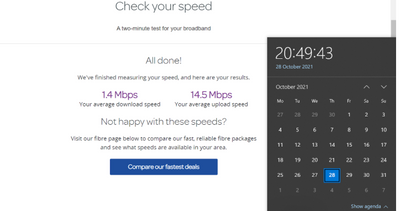 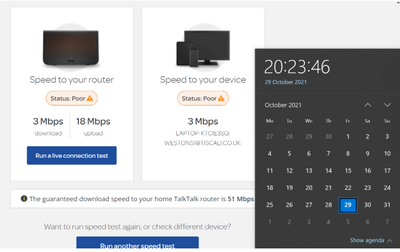 I'm really glad to hear this. This is most likely due to the work completed by our Network Engineers, however I'm just waiting for them to confirm this.

@Michelle-TalkTalk, just to let you know that we had our first problem-free evening for 2 weeks or so, in terms of connection speeds. No buffering, screen freezes etc.

I checked speeds at regular intervals and they were great. I assume therefore that the problem has been resolved?

Thank you so much for your efforts in this!

This issue has now been identified and our team are currently working to resolve. I will post back with further confirmation as soon as they confirm that we can retest.

I've not heard anymore on this since yesterday so I've escalated this further and will post back as soon as I know more.

Thank you. I'm currently looking into this with our Network Engineers at the moment and will post back as soon as I know more.

Hi Michelle, the number wasn't correct (sorry! ) but it is now.

I'm sorry to hear this. Can I just confirm, is the telephone number in your Community Profile correct?

@Gliwmaeden2 thanks for your reply.

Yes I'm on Fibre 65 and have been since July this year. No problems at all before the beginning of last week.

@wephi, unfortunately staff usually don't work on here at weekends, so can't investigate for you before Monday.

Are you on Fibre65? Perhaps just clarify that point, but these low speeds would look unacceptable even on basic Fast Broadband!