My broadband speed has massively degraded and is now down to 3MB/s - can someone help pls?

Our broadband speed is normally around 15-18 MB/s and has been OK since I got it fixed in March.
Every broadband speed test I run gives me a super slow speed so there is a problem.
Are we able to still get help via asking here on the forum?

OK interestingly I got the following in an email, indicating something was actually fixed:

Hello,
We're very sorry you've had a problem with your broadband service. An engineer has recently done some repair works on your line, and your connection might take a few days to adjust.
We'll keep an eye on your service and if the problem happens again we'll let you know what we're doing to fix it.
We're sorry for any inconvenience this may have caused.

If you're having any further issues, please visit Service Centre where you can live chat to one of the team.
Your TalkTalk team

So it seems that something was wrong and it was actually fixed!

The line has been solid as a rock recently.

(Sorry if this is a duplicate reply - after I wrote the previous one it asked me to login, despite identifying me under my account....)

There are now no issues.  Can you please tell me if it was an Openreach engineer or a TalkTalk one who left the message?

No - now the broadband is acting as if there was never a problem.  Noting that electrical things normally don't "heal" like living creatures, maybe some underlying issue was fixed?  And by the way - was it an Openreach engineer or a "Talktalk engineer"?

The engineer notes just say that it's achieving predicted speeds and all tests pass, have you experienced any further issues since yesterday afternoon?

Correct - nobody knocked on the door or rang the doorbell.  Maybe they did some tests at the street and just left?

What did the notes say please?

The engineer visit was between 8AM and 1PM, but nobody ever stopped by.   Have they come and gone already? Can you see if they left feedback somewhere pls?

I would just wait to see what the engineer says, if there's an underlying problem then the engineer may be able to see this even if it's not misbehaving at the time

Unbelievably, now that the engineer is coming out (they have not arrived yet), have a look at the line testing for the past couple days - since midnight it has suddenly started working normally again!!  The previous day (middle box) shows some higher green bars - this is when I used our other internet line - but the rest of the day is random and misbehaving. So it's quite possible the engineer will find "all is OK"... will I be charged if the line doesn't misbehave when he's out here? 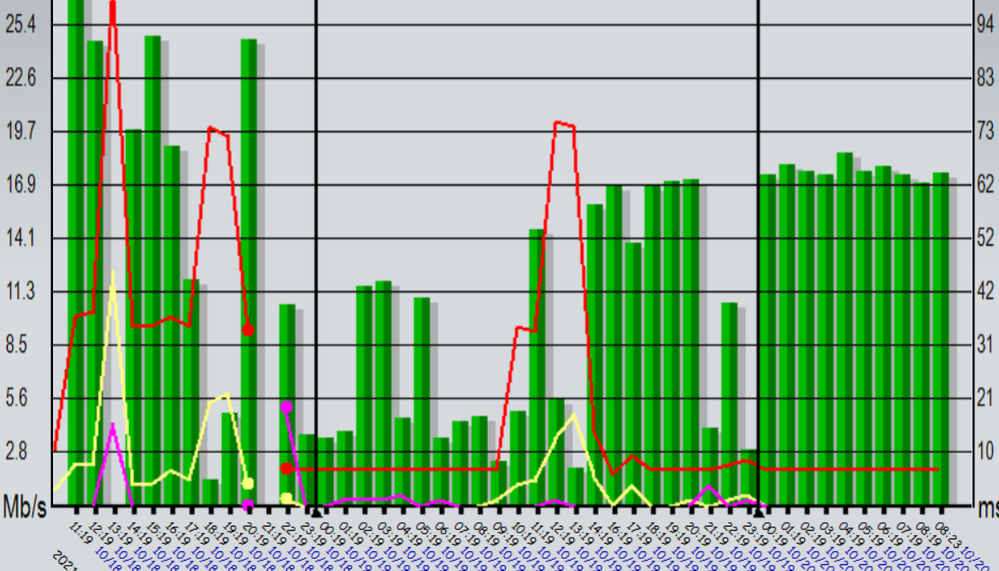 Very frustrating - like when your car has an intermittent problem, you take it to the mechanic who says "looks fine to me"...

I've booked the engineer for tomorrow morning (October 20 2021, AM) - please let us know how you get on

Thanks for answering the security questions, I've sent you a PM

Yes I will accept the charges if they occur. Will reply fully via your PM.

If throughput speeds are still very low then we can arrange an engineer visit. If you'd like us to do this can you confirm:

Hi Chris - I don't use this as a wireless connection - it is connected directly to the router via ethernet cable, and nothing connects to the WiFi for this line, so WiFi is not relevant.

Again the situation is that I have two talktalk lines, which are on the same kind of contract in terms of speed.  One line is functioning normally and the other line is incredibly intermittent, as you have seen.

The fact that you can't detect any issue is one thing, but I guarantee you the line quality has dropped here from being consistently 20 Mbs to now regularly dropping down to 3 Mbs.   If you guys aren't able to fix this I will have to cancel my contract as the line is not usable right now, for whatever reason.  I'll have to switch to a large mobile phone contract instead.

Can you please take some action instead just doing line checks on your side?

If it helps, an Openreach engineer told me that the copper wires going to the main cabinet several miles away are in terrible shape, with many of the lines only carrying a signal a few hundred feet.  He said he wasn't surprised that people have so many issues where I live.  When this 2nd line was installed it took the guy more than an entire day of work to even get me a connection that went all the way to the exchange!  He said that water ingress was very common along with other problems caused by sheer age.

Can you please send an engineer out to figure out the problem?

Sorry, but if you just keep asking questions and saying it looks fine from your and I will have to cancel this service!

I reported this issue more than 3 weeks ago!!

I've taken a look at the real time data from Openreach for the 11th and there is nothing that I can see that could be causing the results that the graph is showing, the error count is zero at the time

Do you experience the slow speeds on both wired and wireless devices?

I would need to keep manually running speed tests for ages and as soon as it goes super slow, listen on the line.  Nobody is able to spend long periods of time doing such a thing.  Surely there is some way of running an automated test or a longer time period test on your side?

As a reminder I have two lines here. I just tested the general household line that everyone uses and got over 20Mbs.  Just prior to that I had run the test on the Work line -- the work line is the one where there is the current problem we are discussing.  I got a result of under 10 Mbs. I listened to the line just after that test and there wasn't a loud crackling sound but a gentle hiss/frying sound that may be normal, I don't know.  Both of my lines have the same exact contract, one is reasonably consistent (the house line) and one is often very bad (the work line).

Can this issue please be escalated?

It has been a long time that I have been living with this!  Can an engineer be sent out to figure why the Work line is so poor?  Otherwise I am going to have to cancel this contract and go with a mobile phone package.  I have had to often use my mobile phone data for work because the line you have supplied is not performing.

Would it be possible to just check the line for noise the next time that you experience problems with your broadband service?

Hi Chris - at the moment there isn't any crackle but if there is an intermittent problem, and that looks like what this is, then doing a 5 second check doesn't really tell us anything.

Is there a way to run a test over a period of time or is it possible to set up a number of automated line checks every 15 minutes or something?  I think all it takes is a little noise burst and the broadband would go down.  But a couple one-off checks is not going to detect  the occasional noise burst.

Line tests are clear, can you hear the noise on the line at the moment?