I had a very stable connection until i upgraded from Fibre 65 to Fibre 150 in September. Since then, I have had constant issues with my connection dropping, alongside tons of DNS name resolution errors on the router log.

I am using the talktalk wifi hub which has been replaced 3 times without solving the issue. The openreach modem was also replaced last month but that did not solve the issue long term.

I've tracked the downtime (see screenshot) and its usually follow a pattern of going down for just over 2 min before reconnecting. I've had openreach engineers visit to make repairs several times over the last few months. This would get things working again for a few weeks before the same issue pops up. It starts out intermittent - perhaps once a day, then escalates to an intolerable 40+ times a day. 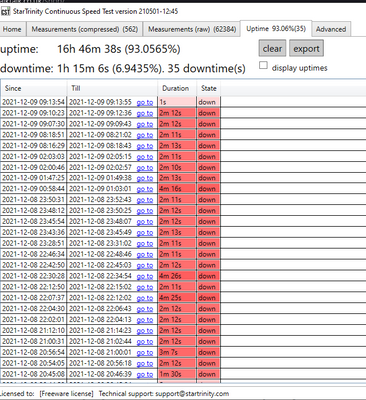 Every chat with talktalk support ends with the same questions about wifi signal and checking the cables. Line test shows no issues or faults. Can you support by forcing a firmware upgrade for the router in case that is what is causing the issue? If not, could a replacement (non-sagecom) router be sent to see if that solves the issue?

I've also added notes to suggest looking at a spare pair or to consider a lift n shift at the exchange.

Please ensure that they have a history of previous engineer visits and conclusions.

I've an engineer scheduled for Thursday 16th PM, is this time ok ?

I'm not sure of the specific conclusions of the previous engineer visits but I know they always did some work on line and master socket and ran a bunch of tests. Most recently they even replaced the modem but that did not solve the issue long term. I would expect TalkTalk to have a record of what issues were found and what repairs were made. Please check and confirm.

If a senior engineer needs to be sent, when is the soonest they can be sent out?

Can I just confirm, were the engineers able to replicate this when they previously visited? If you've previously had a few Openreach engineer visits then we can arrange for a senior engineer visit.

I've had several openreach & talktalk engineer visits over the past 3 months and the issue has not been resolved. Can you confirm:

1) What will this engineer do that the others did not?

2) What can you do to ensure that the issue is properly addressed by openreach?

3) If this doesn't fix the issue, what will TalkTalk do to prevent me from continuing to be charged for internet I cannot use?

Thanks for confirming. I've re-run the line test now which hasn't detected a fault. If it is the Openreach modem that is dropping the connection then the only option is to arrange an Openreach Engineer visit to the property. Would you like to go ahead with this?

The light on the router stays solid white.

I'm really sorry to hear this. Can I just confirm, when this is currently happening do any of the lights change on the router when the connection drops?

Thanks Chris for your help - I received the firmware update on Thursday and while the dropped connection issue significantly decreased (back down to 1-2 per day), the DNS name resolution error issues seems to still exist under firmware SG4K100130. I dont know if this is what causes the connection drops but just adding the info here as an uddate.

For reference, in the 3 days since the FW upgrade, the router maintenance log shows nearly 750 pages of errors - almost entirely DNS name resolution errors. It seems to be especially frequent when a VPN is used on my work PC.

I've been forced to downgrade my Fibre 150 connection back down to Fibre 65 next week in the hopes that this would solve the stability issues. I'll monitor for a few weeks and update here again if the issue persists after that change.

I've sent you a PM

Hi Debbie - The router is always on overnight. In the meantime I dont have a stable working connection and no chat support has resolved the issue. Can the firmware update be pushed? Or a replacement router with the FW installed be sent?

I rely on the connection to work from home and this severely disrupts my ability to do so.

Our Products Team are rolling out new firmware for the Sagemcom hub which should resolve the DNS issue.

They are rolling out the FW in batches. Please can you keep the router powered up all the time as the FW usually updates overnight.