I am at the end of my contractof Faster Fibre. I have about 100m of twisted pair to the junction box, and currently get about 35MB down.

I have been offered the Fibre 35 package (cheaper) which should give me similar performace. However, I am considering upgrading to the Fibre 65, but the website tells me I will probably only get 43–48MB down, and only guarantees 38.9MB.

I would be happy to upgrade and pay extra if  I got a significant speed increase, but not if I was close to the minimum or at the bottom end of the 'expected' range.  So, my question is, is there any way to test the actual potential speed in advance of signing a contract for Fibre 65?

Renewing you contract on Fibre35 should mean effectively no change to your current service since, like I said, Fibre35 is just a new name for Faster Fibre.

@AllyM.... I did not know that they were the same package, so that is very useful and means that your earlier rationale holds.

I measured the distance to the cabinet by pacing it, so it is approximate, but it is actually rather less than 100m. I used that number as just being indicative. Way back, a visiting TT engineer told me that I was connected to that cabinet (he opened it up and fiddled with it). Of course, he could have been wrong.

I have had a lot of problems with the connection over the years (like when it rains!), and have spent many, many hours on the phone to TT support (a large proportion of which was going through the same opening checks with different people), and would rather not start all that again unless absolutely necessary.

Anyway, it seems that I should get the Fibre 35 and accept that sort of speed until my part of the street gets an actual fibre connection – rather frustratingly, it stops at the house next door to me!

Thanks very much (everyone) for taking the time to offer detailed replies and sharing your experience. 🙂

@jussy  as you are not getting 40/10 right now and the BT checker gives a best estimate of 47.2 for the line, there is no way you are connected by 100m of cable to the cabinet.

Upgrading to Fibre 65 would give you, at best, a marginal increase in speeds, especially as the most optimist Handback Threshold is 30.

It would only be worth it if you can get it at the same price as Fibre 35.

They no longer sell the package called "Faster Fibre", they've renamed it "Fibre35". it's exactly the same service just with a new name.

You still haven't said what sync speed you are getting. Assuming you are hitting the 40Mbps cap with Faster Fibre/Fibre65, I would assume from the TalkTalk and BT website estimates that you will get somewhere in the low to mid 40s on Fibre65.

If the cabinet were only 100m away as you claim, then you should be getting close to the maximum 80Mbps, but the estimates you have been given, as others have also mentioned, don't support that theory. I'm not sure how you are measuring the distance to the cabinet, but it must be much further than that. Bear in mind that the cabinet closest to your home may not be the one you are connected to.

@AllyM– your rationale is good and would answer my query, except that my current package is not Fibre35; it is called Faster Fibre and I just dug around in old emails. They only ever promised 37 Mbps down with it. So, I guess I still do not know the possible benefit of Fibre65...

currently get about 35MB down.

Is 35Mbps the sync speed or throughput?

Fibre35 is capped at 40Mbps download sync speed, Fibre65 simply removes that cap, so if you are only connecting at 35Mbps sync speed now, upgrading to Fibre65 won't make any difference.

If you are currently hitting the 40Mbps cap, then upgrading to Fibre65 may give you an increase in speed but judging by the estimates you have posted, it will probably not be much more.

Well the cabinet may be 100m away, but that certainly suggests that your line takes a more tortuous route! You will get little benefit from upgrading your current package.

Here are the BT results (with address – the screengrab I posted earlier was BT without address):

@jussy Try the link which @martswain posted earlier and copy the results in here after obscuring your address.

The distance is accurate! It is not a great cable... I get a lot of dropouts if it rains hard!

@jussy  if you were really only 100 m from the fibre cabinet you should already be getting a very solid 40 down and 10 up. 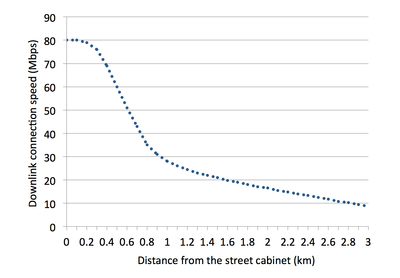 Use this BT checker for another estimate of your speed range and handback speed.