After working flawlessly since remote working began, I attempted to connect after being off work for 3 days and I'm suddenly unable to connect to my workplace VPN using Windows 10 VPN capability.

The following error is shown: 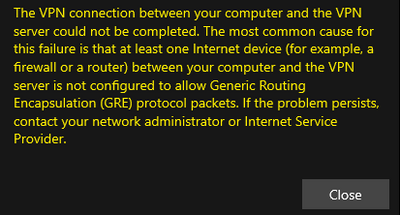 Troubleshooting has led me to diagnose the talktalk router (or router firmware) as the source of the issue, as the VPN operates normally when tethered to a 4g mobile hotspot.

I've attempted reboots and router restarts without any change.

I consent to any firmware changes that can be carried out immediately and/or for a new router to be posted to me if required.

This issue is urgent as I'm currently unable to work due to this issue.

Talktalk live chat have confirmed that their engineers are currently working on this issue and hope to have it resolved within 2 hours.

Apologies for this. I've made a change to your router firmware, please can you retest and let us know how you get on.

Thanks for creating a new topic, if you are not able to get this issue resolved over the weekend by the chat or phone team, the support team here should be able to help next week.