I am pretty sure that a hospital would not allow you to jump the queue if you kept saying "me next." Same here. Wait your turn.

Interesting that you think I want to “jump the queue”. That’s a bit of an assumption. I never said once I wanted to skip the queue. For clarity, I’d happily let someone skip me. So perhaps don’t assume. It’s makes an ass out of u and me.
1 Like
Report Inappropriate Content

I didn't say that, the assumption is all yours. Stop posting and wait. I can't explain things any more clearly.

And now you claim you didn’t assume I wanted to jump the queue?

Talk talk logic. You’ve got egg all over your face  lad. Oh and by the way...I understand the weird rule about not posting is the only way to get a response. I’m challenging that weird rule.

Noticed something else about this forum. The posters with lots of history of posting all like each other’s responses. And also seem to spend a hell of a lot of their free time on here taking what would like like the talk talk ‘party line’. I can’t believe a non affiliated person would spend their free time responding to talk talk queries. I wonder if in fact you are employees of talk talk?  Maybe should have went to twitter.

You brought up the hospital comparison, not me. Hey, if you think that is comparable then I cannot argue.

Wait for a response.

How does using a hospital example = it means I’m wanting to jump the queue?

Or keep posting. Or go to Facetwit. Do what you like. But  I have already suggested you wait here and the support team will help. And I am nothing other than a customer like yourself trying to assist others.

Over 22000 posts and registered since 2013. You’ve spent 7 years of your life discussing talk talk queries for fun? Pull the other one.

Absolutely right, I engage here as a helper as do many other people on many other forums, have you never come across that before? Probably not, you just want an answer and then go away. Fair enough, you will get your answer here if you wait.

@Tartanarmy1 do you want an answer, or just to annoy the Community Stars with your utter p*sh ?

Now, what was the question ?

Somebody please padlock this topic until an OCE gets around to it.

I’ve definitely hit a nerve with my comment about you both being affiliated with talk talk haven’t I. Post one has the question Martin. With your experience on this forum you would think you would know where the original posts sits.

Ironic that you are asking it to be padlocked. The wee rule of “only getting a reply when you silence yourself” isn’t working here is it?
1 Like
Report Inappropriate Content

There's no question in post one, just screen shots.

I don't really get why would want to pillory people that are happy to help you unless you are just flaming?

Other than the OCE's no one here is affiliated with TT, it's mainly customers trying to help other customers. As you work in a hospital I would have thought you could understand that concept. There is no conspiracy going on...no one is out to get you.

Anyway the facts are that if you keep posting it will take longer to get an answer from the OCE's. That's a fact, like it or not, which as I understand it is based on the concept of trying to minimise delays with dealing with issues...As in deal with the oldest one first. Perhaps they should introduce a triage system but then if they did that may well push you even further down the queue of getting a response from the OCE's.

1. Why was I sent an email saying a third party cancelled my talk talk/ I cancelled it when it was in fact talk talk?

3. Why do talk talk think a reasonable solution is to give me the £24 a month contract but then add on a £30 one off admin fee which therefore wipes out the deal.

4. Why did they only provide credit to cover said admin fee when I threatened to leave?

5. Why was I verbally told I would have free speed boost (normally £2.50) and then followed up with a letter confirming this, only to then discover this hadn’t been applied?

6. Why did it take me three attempts to have the original £24 offer honoured? And why inbetween these attempts did talk talk verbally agree each time only to then not apply it.

7. Why can’t I see the cost of my package on my online talk talk account?

8. Why did talktalk not inform me of pro rata charges when signing up?

9. Why do I have unexplained small fees added to “other charges” on my bill? I don’t even have a phone so don’t start saying I’ve used too many minutes or something.

10. Why does talktalks online chat say it’s open to such and such a time but then when you click it it said it was closed?

11. Why was I passed from department to department and kept on hold for hours for each call?
1 Like
Report Inappropriate Content

I can only answer no. 7 as I'm not an OCE or in anyway affiliated to TT so don't have access to the info but for no. 7 you need to look under "My Package" under "My Account" on the TT web site (not the forum). 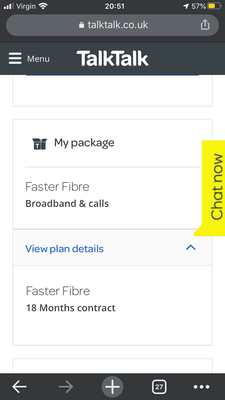 here is what I can see. No clarification of the monthly cost or the speed boost. Despite them sending me a letter saying I have free speed boost. The only other section I can access is the bills bit. But it has two, one for £27ish and then another for £9ish. All with weird charges and a fee for speed boost (my letter says it should be free) 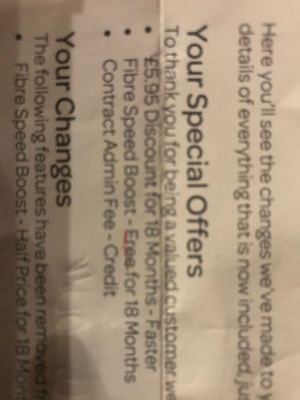 and here is the letter I was sent. Nothing matches up. The letters, verbal, my online account.

Maybe something to do with the mobile web site.

Here is mine from my PC 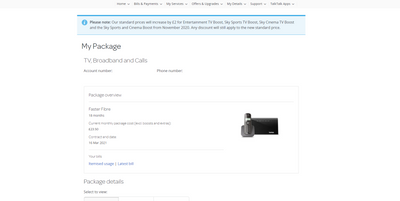 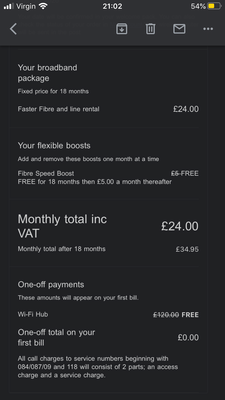 and here is what I was originally meant to have. This is an email from talk talk themselves. 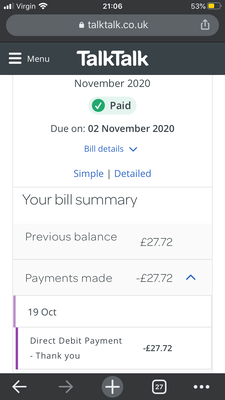 2 Likes
Report Inappropriate Content
This widget could not be displayed.