Exactly the same thing has happened to me as I see has happened to others in this forum.  I received an offer to renew my broadband for £29.95 and clicked on the link in the email back in June and received a confirmation that I had accepted (which luckily I took a screen print of).  I have just noticed that for the last two months I have been charged £40 rather than £29.95.  When I called to complain they said there was no record of me accepting the offer and no way I could send them the screen print.  They refused to refund the overcharging as it is my word against there's.  I have had to raise a formal complaint and I have to wait until Friday for a complaints handler to call me back within a two hour slot.  Given I am out of contract I am tempted to walk away but the actual broadband service I receive is fine.  As usual it's a case of TalkTalk being great up to the point that something goes wrong.  As I see that I can attach the proof here, perhaps someone would be kind enough to sort this out for me.  Ideally I don't want to stay in on Friday evening waiting for TalkTalk to call me. 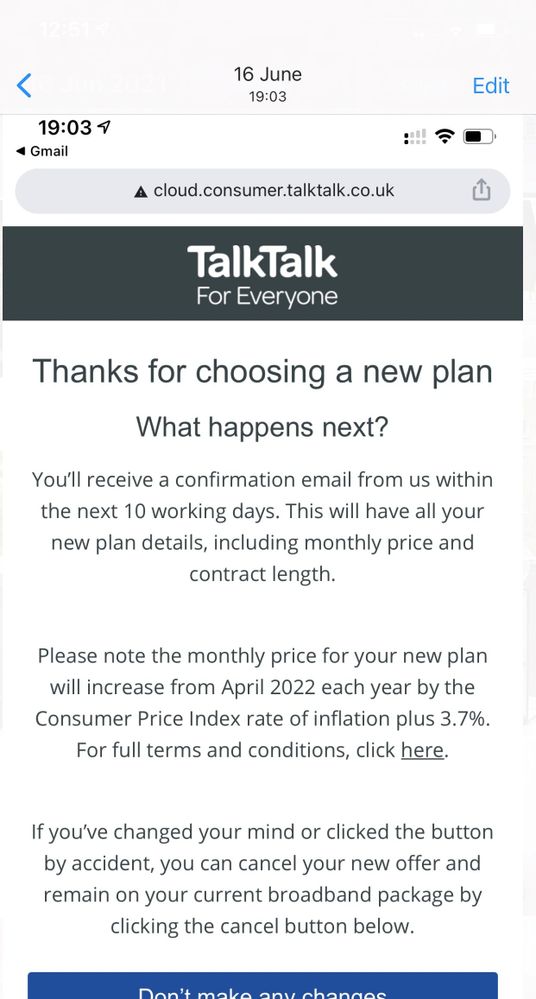 I will not touch touch the account as requested.

@Arne-TalkTalk please do not action any updates to my account.  As I am out of contract I am going to wait for the outcome of my complaint.  Your data breach and the chaotic way my renewal was handled makes me think this might be a good time to make a move.  Thanks for trying to help but please do not renew my account.

Ah, I made assumptions about the service you were on, didn't realise it was G.Fast 150 in which case the price offered seems pretty good, apologies.

The way this has gone so far, I may well end up in the retentions department.  Fibre 250 has just become available in my area as well, this deal was for Fibre 150.

As Arne said, he is not in a position to process a renewal directly, that just cannot be done here I'm afraid. Had a deal been processed other than agreed that would be a different matter. I would suggest though that all that information gives you good evidence for when your complaint manager calls, including an argument for a credit while you have been paying full price. And a personal opinion: you should be able to get a better deal than that and I would negotiate accordingly! I don't know if the complaint will hamper this, but another alternative would be to call the retentions team directly on 0345 172 5157 and explain the situation.

@Arne-TalkTalk here's a copy of the email you sent me.  I assumed you wou

ld record this on your CRM but here it is anyway.

I completely understand , however the confirmation email does not give me any indication of the deal that was being confirmed, (other than your post details), We cannot process renewals on the community it has to be done via Loyalty, however if your account had shown the deal agreed I can take action at that point to fix the error, sadly there is nothing on the account.

Once you deal is confirmed I will happily look into the past 2 bills as an apology for having to go through the renewal process again.

Thanks for trying to help @Arne-TalkTalk but, if you look at my original post, you will see that I have attached the confirmation I received from you.  Whether you actioned it or not should frankly not be my problem.  I had expected that you would see recognise you had collectively dropped the ball and put in place a service recovery action, I hadn't expected to be told the money you have taken from my account was lost and I should call your "loyalty" team to be rewarded with the offer I accepted on the 16th June. @ferguson you sound like a sensible person, is my expectation too high?

Sorry that you are having problems.

I have checked the account and there is no renewal order, this means you are being charged full price as all you previous discounts have ended, So I would suggest calling our Customer Loyalty Team during Business hours (Monday to Saturday 10:00am to 18:00pm) on 03451720046.

They will be able to reduce your price per month moving forward.

Let's see, it has been flagged up here and I know they will do the best they can in the circumstances.

I feared that might be the case.  I was told the only way of getting a refund was to raise a complaint.  I really just wanted someone to refund my £20 but the agents don't seem to be empowered to achieve a first contact resolution.

If you have raised a formal complaint then the support team here may not be able to help directly, I think you may have to wait for the call I'm afraid.