Hi, I ordered Fibre 65 on the 15th November. My Account page now indicates that I have been moved onto the Fibre 65 package, but I have not received the Wifi Hub Black which was advertised as included.

Please could you confirm that the hub is being sent to me, and give an estimate on when it should arrive?

I have ordered you a Huawei WIFI hub and a returns bag for your current router.

Please allow 24-48hrs for this to arrive. Let us know how the connection compares with this router.

It is a Huawei HG633, however I must respectfully argue that this is besides the point, as the order screen for the Fibre 65 specifically and clearly states "Wi-Fi hub Black included" with no statement that this is dependent on present equipment. I have included photographic evidence of this below, which I took at the time of placing the order, as it wouldn't be the first time TalkTalk have failed to provide me with something that was promised as part of a package. 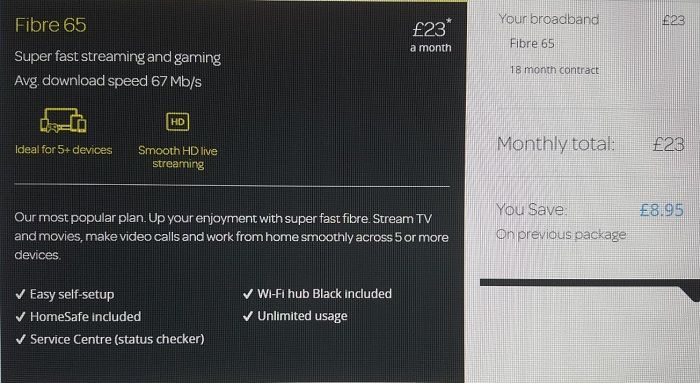 I wish to also point out that when I first moved onto my previous Fibre package with TalkTalk (around April 2020) the fibre engineer specifically informed me that the HG633 was not well suited to the fibre service, and that I should remind TalkTalk that a new router (which TalkTalk had also promised with that previous order) should be sent. I did raise this with TalkTalk at the time, but the promised router never arrived.

I let it slide back then, but have had suffered numerous issues with our service since, particularly with regards to wireless connections, which frequently seem unstable. A big part of why I ordered the Fibre 65 service was so that I would receive the hub which, again, your order page says is included.

If I am not being sent the hub, then TalkTalk is guilty of false advertising - in that instance, I will be raising a complaint and looking to cancel my package in favour of seeking a more honest service provider. I am hopeful however, that this can be avoided by TalkTalk simply acknowledging that they are in error here and that they will rectify their mistake by fulfilling their promise that I have provided photographic evidence of. Please can you confirm this will be the case?

You would only receive a replacement router if your current router isn't compatible with the new service, which router do you currently have?