I've noticed for the past couple of days that my Fibre 65 download speed is dropping at peak times.

My testing device is connected directly via ethernet. Router has been restarted, I've segregated the device so there's nothing else (either via WiFi or ethernet) that could be affecting it during the tests. I've also changed ethernet cable (not that it should make a difference -- as it's fine outside the evening hours). I live less than a couple of hundred metres from my local exchange.

Based on the fact the upload speed is working fine, and that this only happens during the evening hours, I can assume my download speed is being throttled or oversold (I had no issues with Plusnet who offered the same speeds consistently). I doubt there is a router issue or line issue otherwise it wouldn't be possible to achieve the maximum speeds late in the evening or early in the morning.

I work from home, especially during the evening hours, so I need this issue to be resolved. 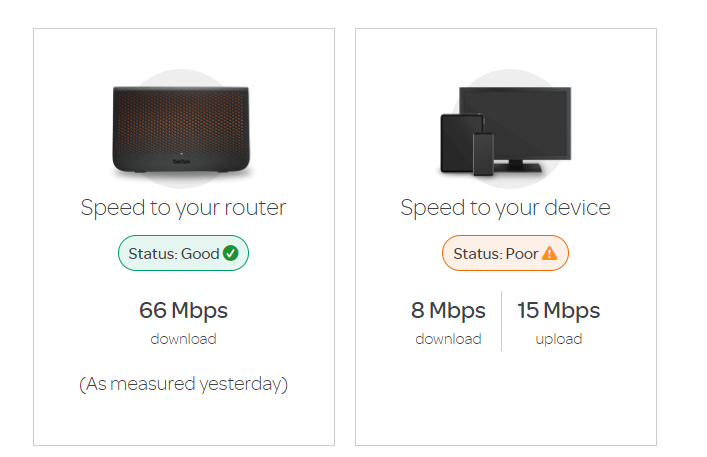 Another evening of high ping and low speeds.

It's been a week since I initially reported this issue and nobody has contacted me regarding actually getting this issue fixed.

If it can't be fixed promptly then I expect to be released from my contract without any penalty so I can switch to a different provider as soon as possible. 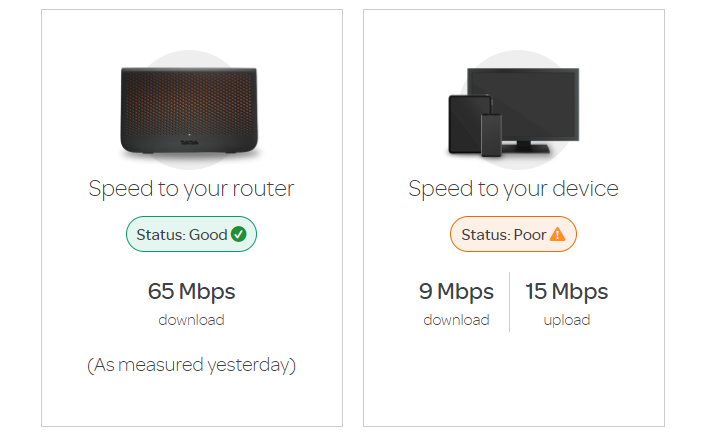 Thank you. Hopefully you hear back today with some good news.

There is no direct number for the network teams, but I've emailed them directly for you asking for an update and if there are any issues with the exchange.

Is it possible I can get a phone number to contact the network team directly?

It's almost been a week since I posted here originally and still having issues with single digit download speeds in the evening due to throttling. I need to get this resolved quickly.

Still high ping (~50) and very slow download speed again for another evening in a row.

It will go into the single figures again later, certainly. 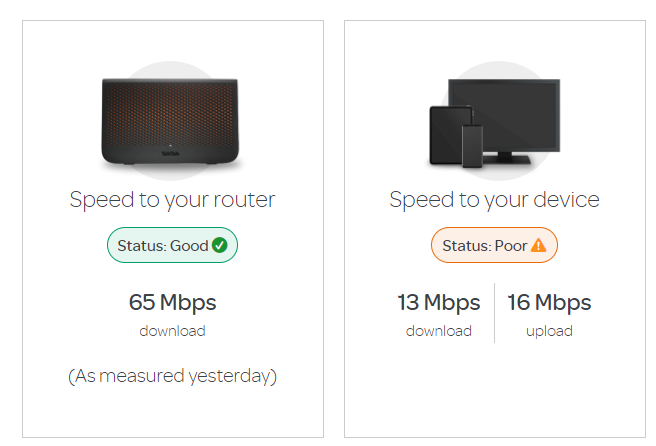 no updates from our network team as yet.

Just to report speeds were still low last night as per usual.

Has there been any update?

Thanks. Hopefully some news comes back and we will see how it goes later this evening.

Thank you for running the speed tests. I've contacted our Network Team earlier this morning and will let you know as soon as I receive an update back.

Hi martswain, thanks for the suggestion.

Here are screenshots below. 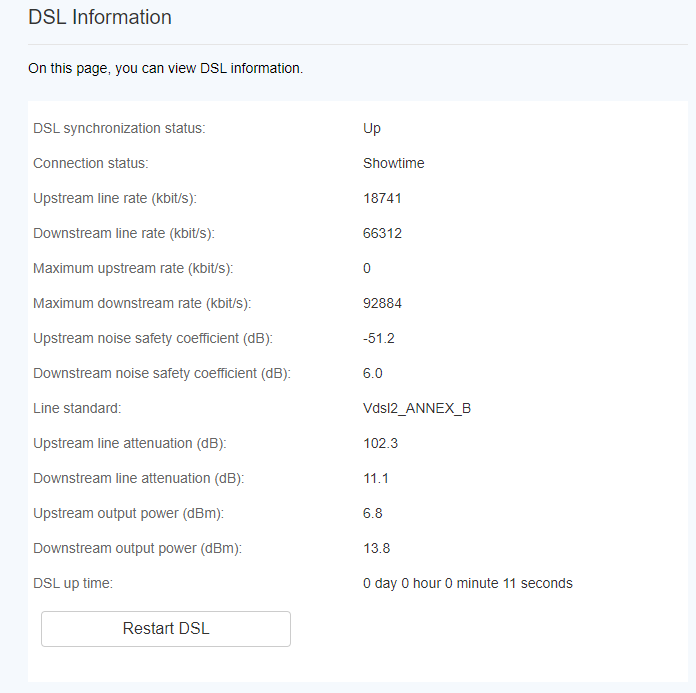 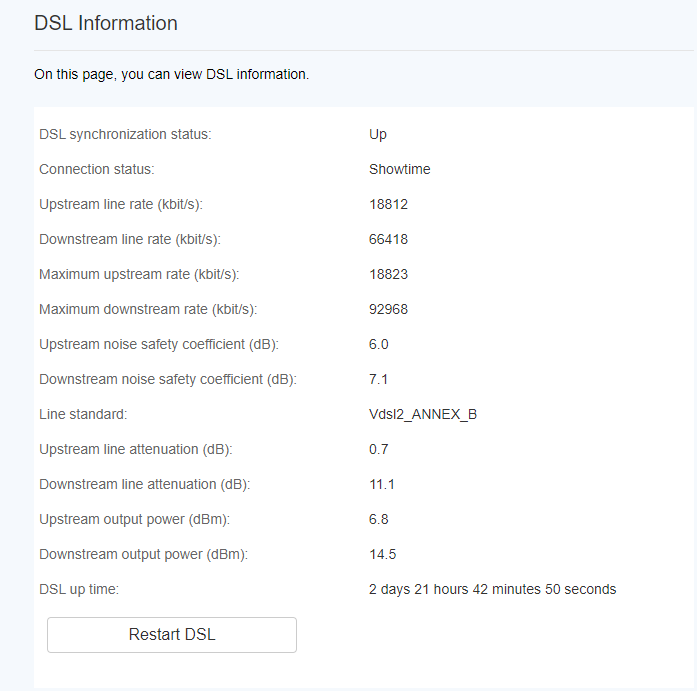 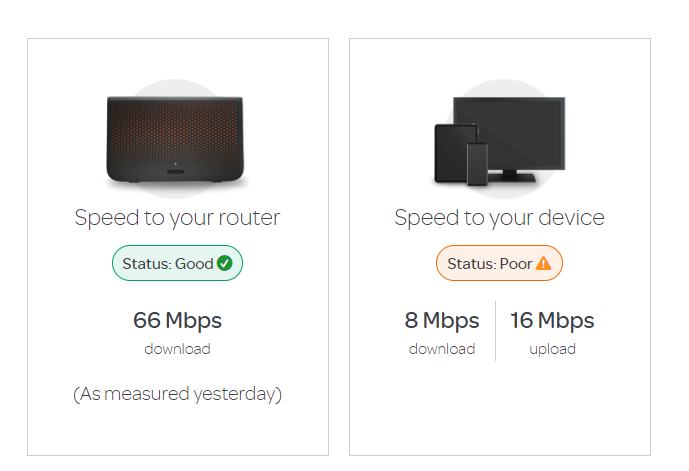 @fuzeweb , OK, check your router stats NOW when you have slow throughput, I'll bet my pension it will be 66 Mbps and hasn't dropped for days, check the logs.

Log in at 192.168.1.1 and post the whole set of DSL stats including noise margins, as if they are dropping low that can increase errors and slow down throughput even if the connection does not drop out.

As you are NOT reporting any drops in connection, the "speed to your router"/sync speed will not be changing at all, as it is highly unlikely it would reconnect at exactly 66 every time.

I believe it's 'tested' at 12:01AM each day (as per the 'last updated' time on the TalkTalk speedtest site). This is when there's very little or no congestion on the main network. If it were tested when I trigger the speed test in the early evenings, it certainly wouldn't be reading that number. Hence I have no doubt there isn't a line issue or a hardware issue, because I know the line is certainly capable of it. But without a doubt either the network has been oversold and/or TalkTalk are throttling the download speed - both of which are completely unacceptable. This time 2 months ago with PlusNet, my speeds were consistently able to max out any time of the day.

Sadly another evening with tragic download speeds. I anticipate it will drop into the single figures within the next hour or two. 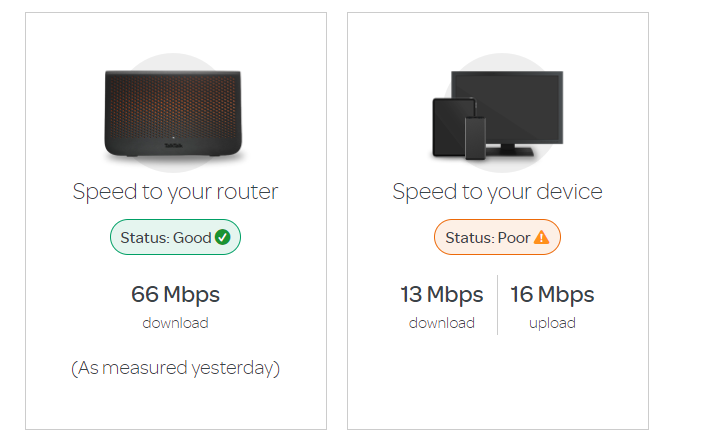 The "speed to your router" is the sync speed with the fibre equipment and your appears to be a solid 66 Mbps without any drops.

There is obviously a throughput issue at times.

Just to provide a further update with another test this evening.

This evening at 22:20, absolutely shocking speeds. Barely 10% of the speed I'm paying for as advertised. After searching the customer support forums here, it seems to be a consistent issue of speeds reducing in the evening at peak times.

It's also disingenuous that the 'speed to your router' tests are performed in the early hours after midnight, when clearly there's no congestion on the network.

Apologies for being agitated and it's in no way targeted at customer support staff, but this is really not acceptable. 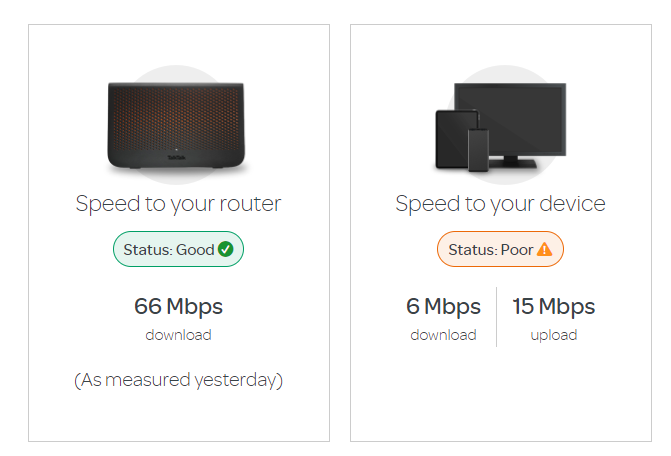 I've done some speed tests throughout the day which reflect the drop in the evening. Latency also increases.

All the same hardware, via ethernet, no other devices connected, etc.

Clearly it's a congestion issue or the speed is being throttled by TalkTalk so I'd really appreciate if you can pass this over to get it rectified. 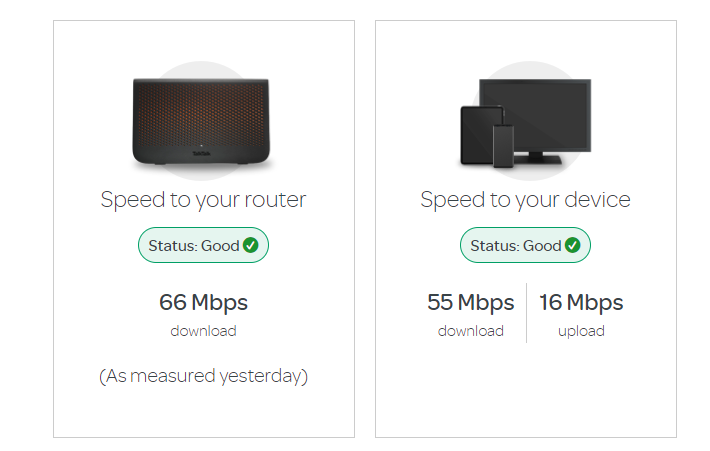 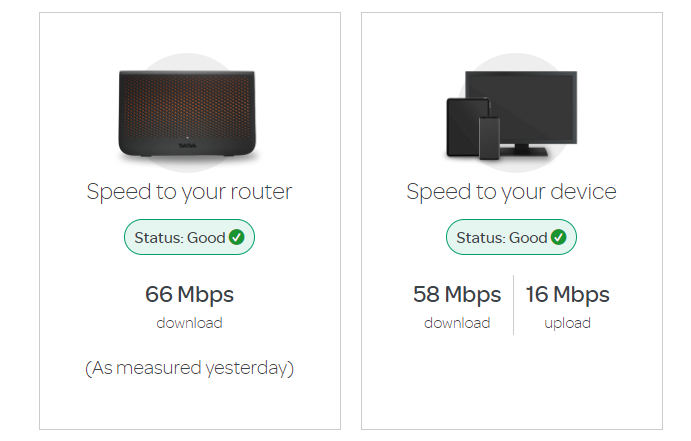 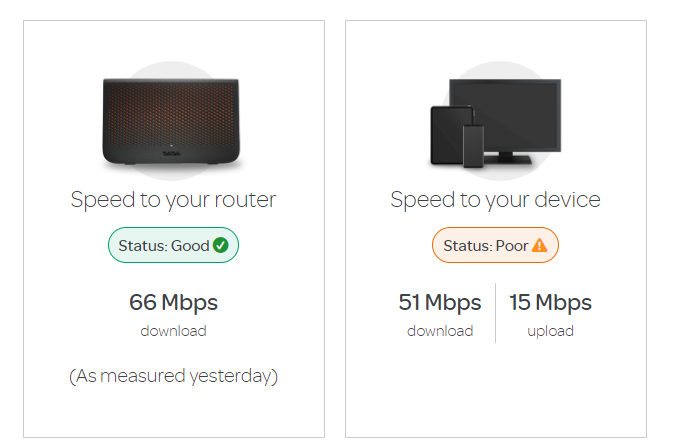 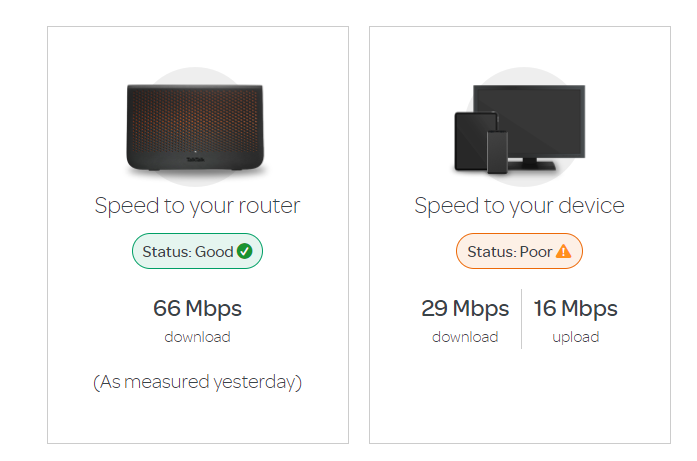 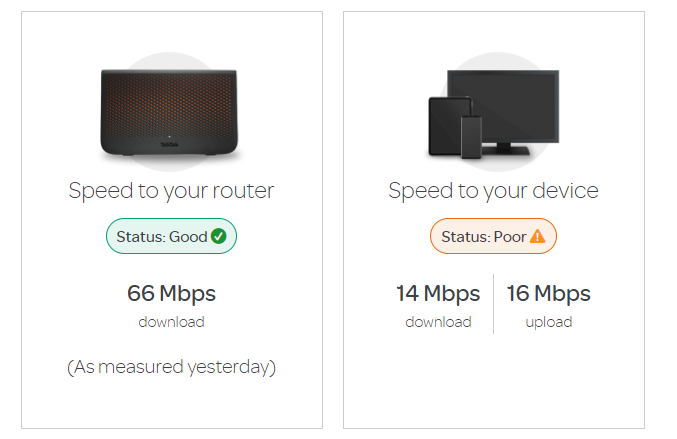 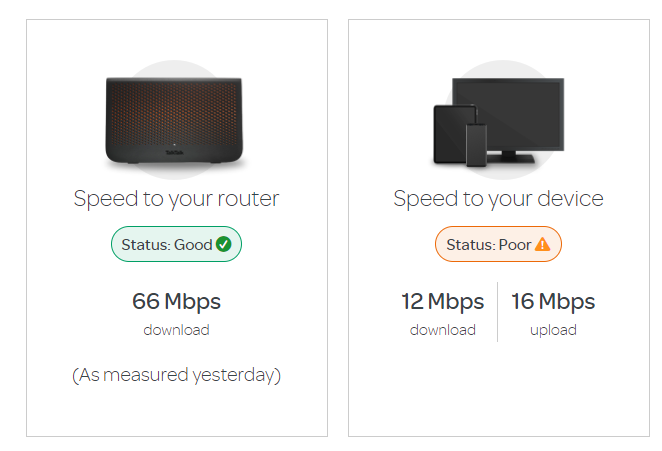 I'm sorry to hear this. I've run some tests on the line now which are clear. Would it be possible to run a few more wired speed tests at different times of the day (morning, afternoon and evening) using the TalkTalk Speed Tester and we can then pass this over to our Network Team for further investigation.

Just to post an update, the only variable has been time (a little over an hour - further from peak time).

I anticipate it being full speed in around an hour or so.

However it will likely reduce back to the screenshots I posted earlier tomorrow early-evening. 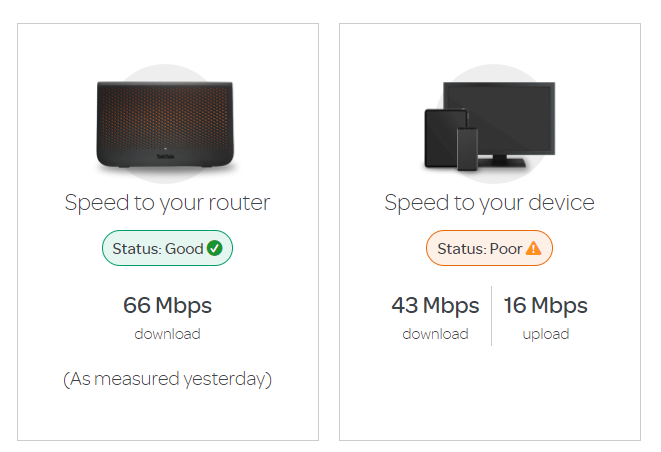