As UFO recently went live in my street I placed an order. I was able to book an install date within a week of ordering.

I wanted the homeport installed in a first floor room which I use as an office. This was no problem: the fibre would be run from the street connection point (known as a Toby Box, or Toby for short) under the wall at the front of my drive, under the drive to a box on the front of the house. In that box it would connect to another fibre cable which would run up the outside wall and in to the homeport terminating at the GPON terminal (aka the "fibre modem").

The first problem was drilling through from the Toby under the wall: the concrete under the wall was too tough and the engineer's drill was overheating. So we agreed on plan B: run the fibre up the wall about 10cm in a riser guard and then through the wall. Fortunately the cable exit on the house side of the wall is below the level of the flowerbed so it's hidden. 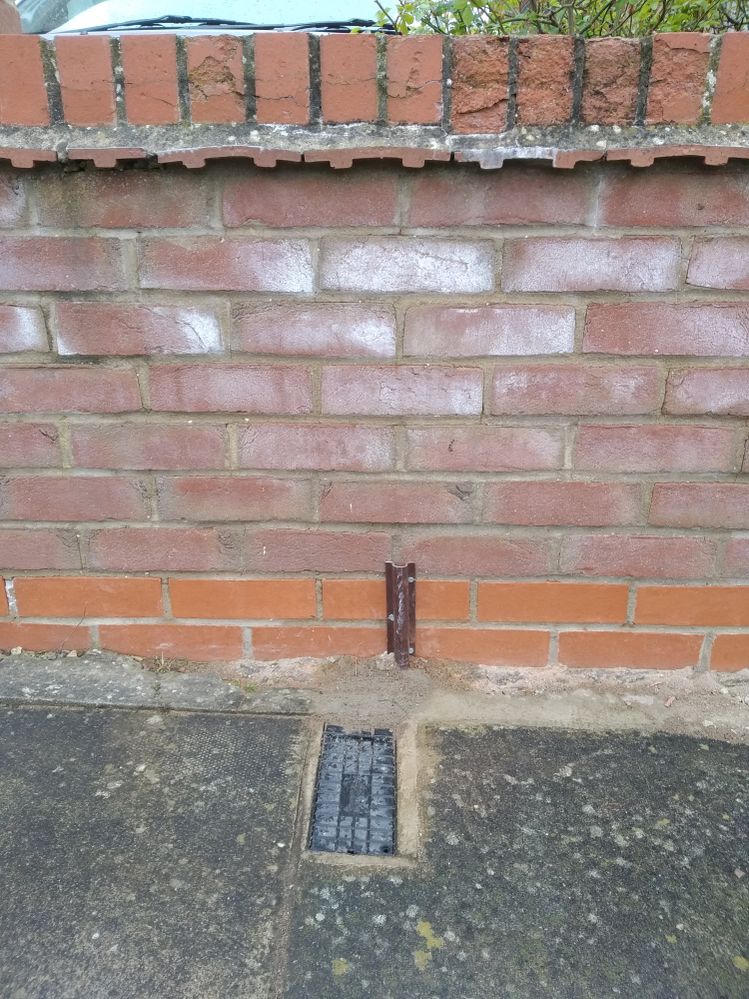 riser guard on street side of wall 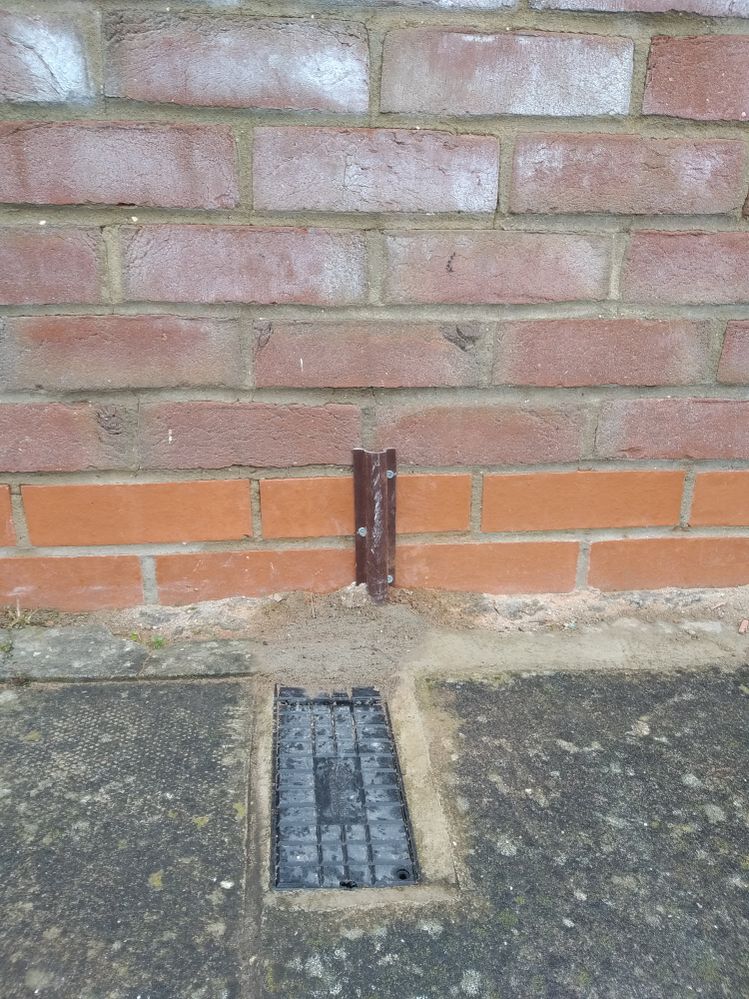 riser guard on street side of wall

The rest of the install went relatively smoothly: the engineers lifted the paving blocks on the drive and ran the fibre through plastic tubing under the drive. The cable comes up at the front wall of the house into the junction box: 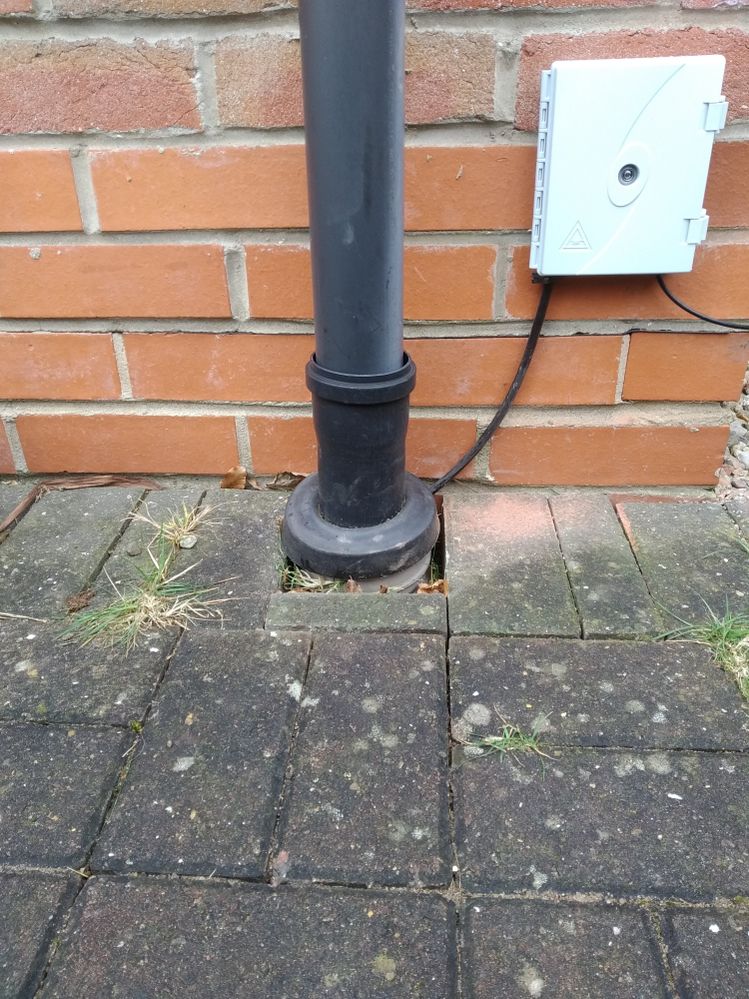 cable exit from under drive 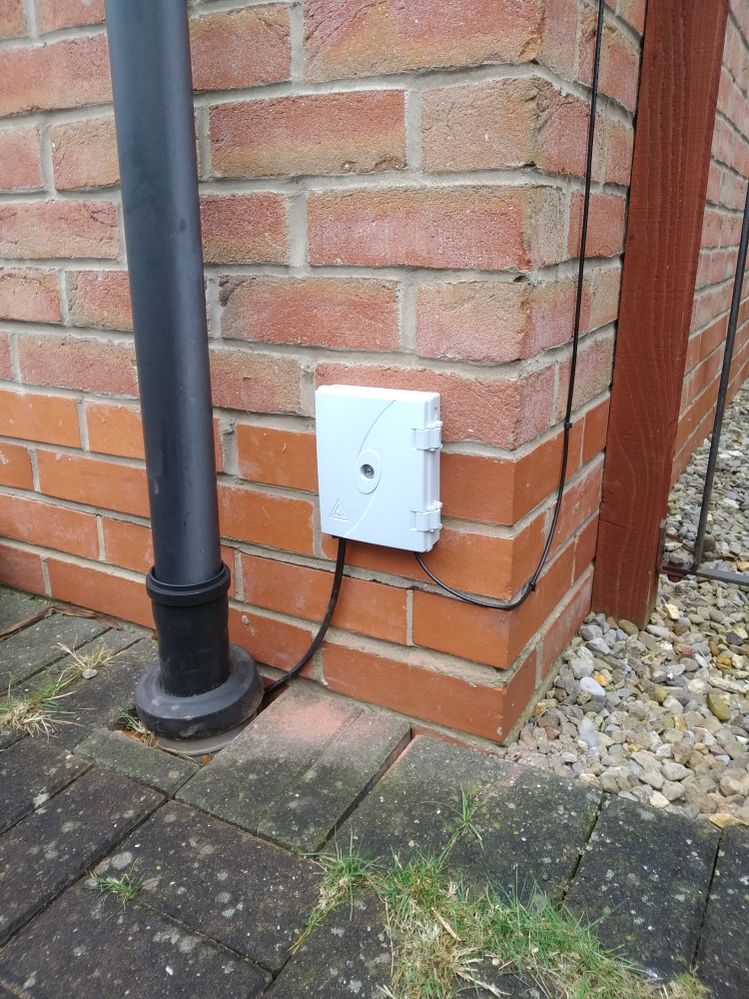 junction box on front of house

From there another cable runs up the wall to the first floor: 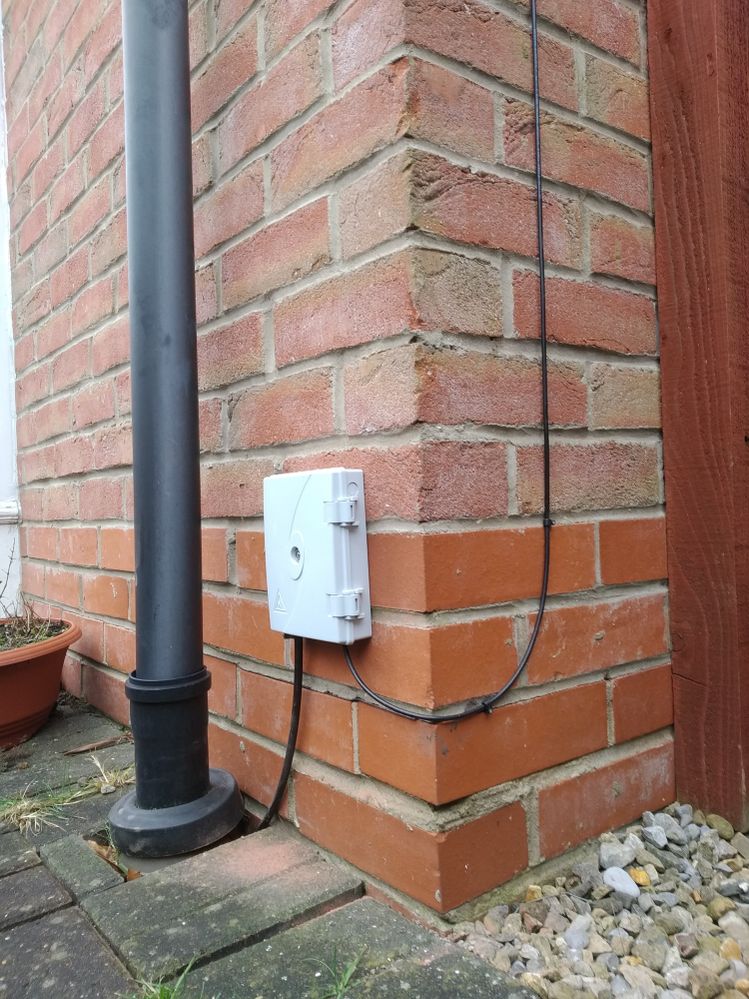 cable from junction box runs up side of house 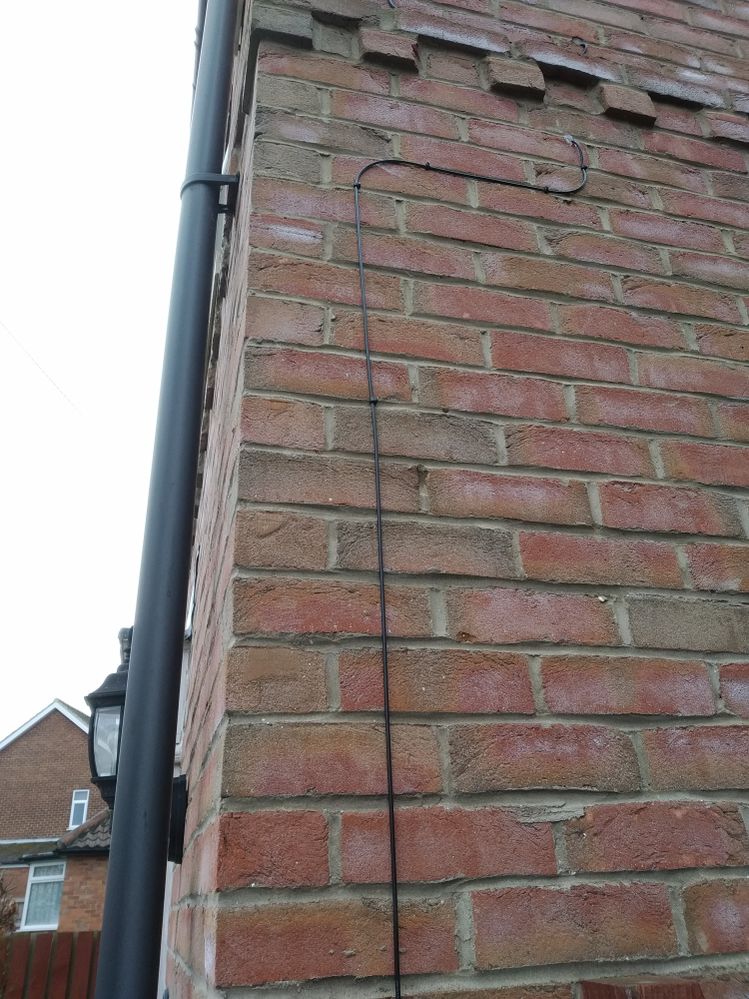 I had some discussion with engineer regarding placement of the homeport. I didn't really want a phone socket as I won't use the landline, plus I can easily connect a phone to the port on the GPON terminal at a later date. But the engineer absolutely insisted I had to have one and was very keen to place the homeport directly above it. I said no as it would have stopped my desk going back against the wall so we compromised on mounting the homeport lower and putting the phone socket next to the existing Openreach master socket.

In the end he put it a bit too close for my liking: to take the front off the Openreach socket you need to squeeze the sides of it and he hasn't left any room for fingers to reach the side. But that's a minor issue as I can easily move/remove the phone socket at a later date.

The fibre enters from the back of the homeport (you can just see the hole just below the GPON terminal and battery box). The battery box (on the right) connects to mains power and powers the GPON terminal (left) in the event of a power failure. I didn't get a proper look at it but I think it contains rechargeable AA cells: 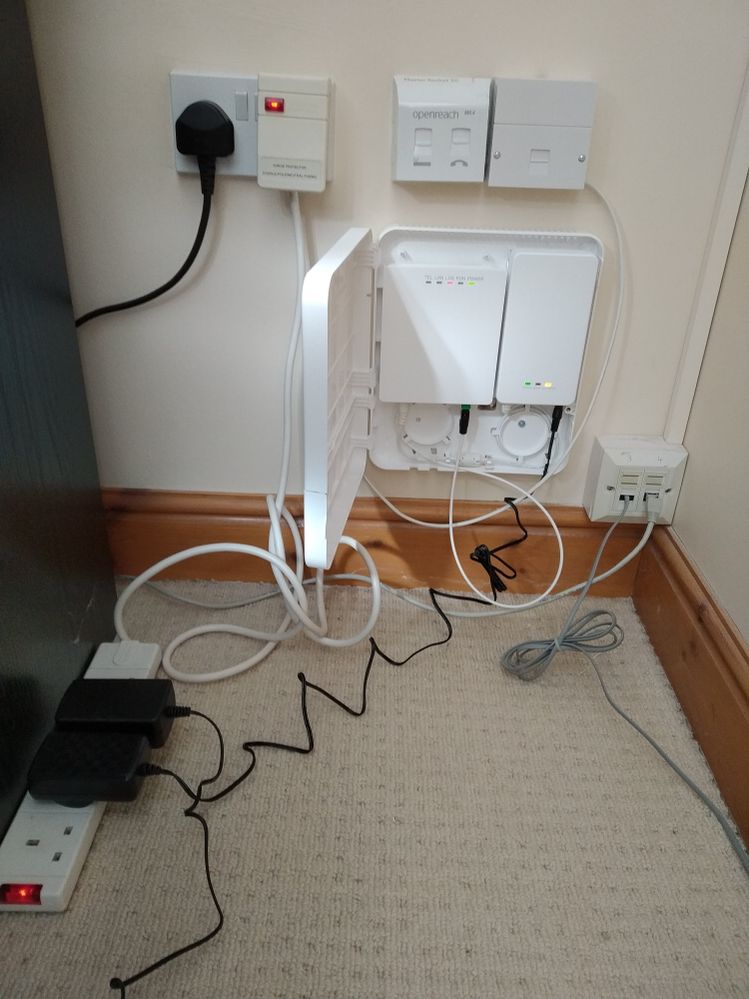 Close up of the homeport: 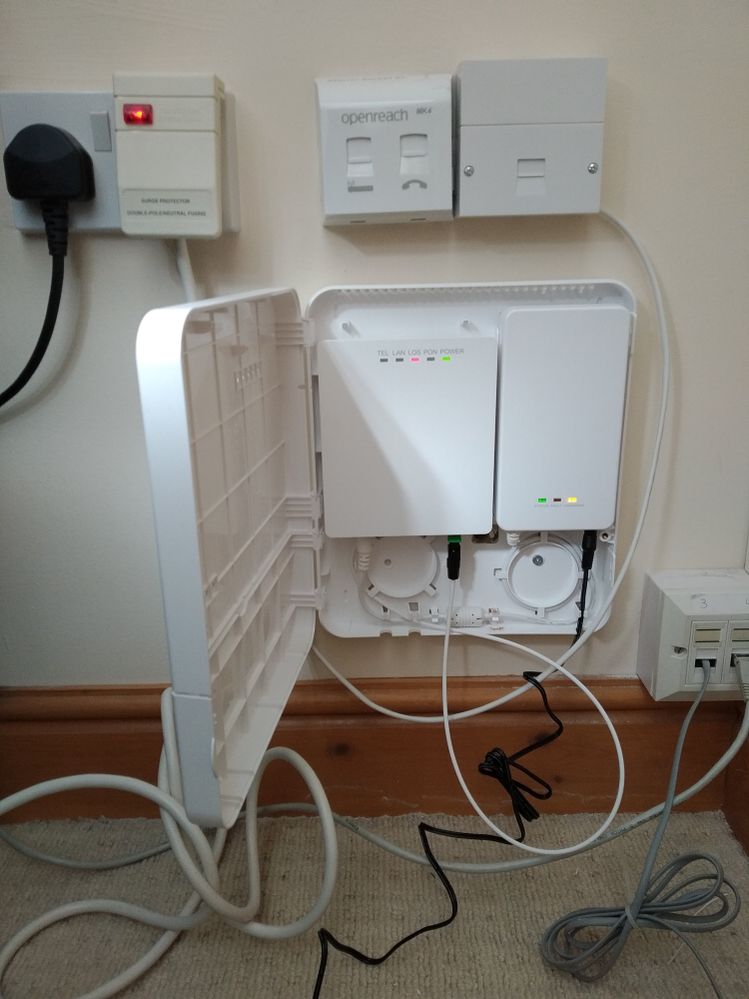 Underside of the GPON terminal. Ports from L-R: 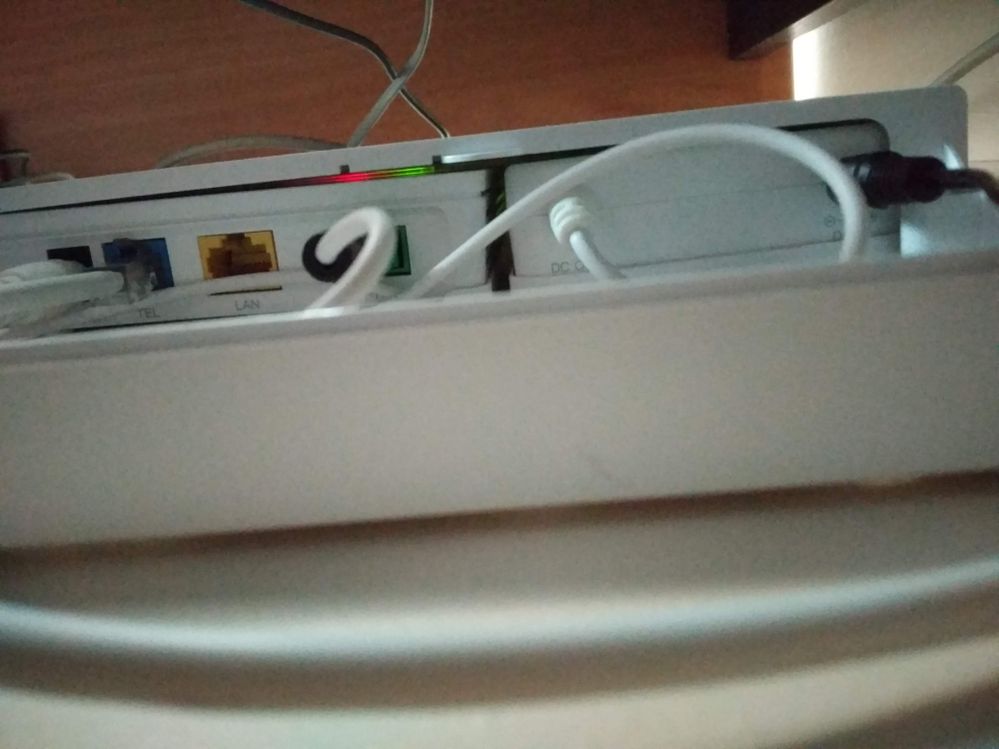 Unfortunately after all the install work was completed the service couldn't go live due to "light level too high at the cabinet" 😞 So I'm currently looking a pretty flashing red LOS light and waiting for news of a fix.

Anyway hope that helps document the install procedure and answers a few questions about where it's possible to place the homeport.

Not the nicest or neatest install I've seen but many thanks for taking the time to share your experience.

I assume the UFO team are keeping you updated with progress on a go-live situation?

Someone did call round after the engineers had left to look over the install and he said he'd chase it up - other than that I haven't heard anything.

But to be fair it was only installed on Thursday so there's only been 1 working day since then. At any rate the website seems to know it hasn't gone live.

Have you tried contacting our UFO Team via LiveChat?

Unfortunately UFO chat is showing as offline for me. Could this be because I'm currently accessing it via a different ISP?

Mine is showing the same, they are probably just busy. They should be available until 8:00pm so keep trying.

The only contact I've had with TalkTalk is when I've chased them via the chat service. I'm starting to wonder if the service level on UFO is going to be reliable enough for someone who works from home permanently. I've heard anecdotes of other users being without phone/Internet for two weeks, one due to water ingress in the junction box on the side of the house i.e. an installation defect.

Maybe I've just been lucky, but in 15 years of using an ADSL/FTTC service I've never suffered an outage longer than a couple of hours. Perhaps I'll have to look into some kind of 4G failover to cover UFO downtime.

Have the UFO support team given you any indication when the service will go live?

Nope. Last I heard (on Monday I think) was "It's with the network team. No further update at this time."
IT tech & all-round geek. Specialise in networking, IPv6, servers, Linux. Based in York.
0 Likes
Report Inappropriate Content Reply
Highlighted

OK thanks, all i can suggest is contacting the UFO support team again to see if there have been any further updates

So today is 4 weeks exactly since my UFO install and still no service. I was promised by the UFO support team that the cabinet issue would be fixed today but even after rebooting the ONT I still have a flashing red LOS light.

Is anyone from TalkTalk able to escalate this as I'm starting to lose the will to live?
IT tech & all-round geek. Specialise in networking, IPv6, servers, Linux. Based in York.
0 Likes
Report Inappropriate Content Reply
Highlighted

Update: checked my cabling and discovered the fibre in the junction box has come out of its connector (doesn't look damaged, fortunately).

I managed to get through to customer services by phone: thanks to Neil who booked an engineer visit for next week. Hoping there's a faint light appearing at the end of the tunnel.
IT tech & all-round geek. Specialise in networking, IPv6, servers, Linux. Based in York.
0 Likes
Report Inappropriate Content Reply
Highlighted

Update: my UFO is now finally live! More than anything I'm enjoying the boost in upload speed - pushing large backups to the cloud is much quicker.
IT tech & all-round geek. Specialise in networking, IPv6, servers, Linux. Based in York.
0 Likes
Report Inappropriate Content Reply
Highlighted

Great news poppadum.   I'm sure you'll agree it was worth the wait.

As you say, the upload speed is the most amazing thing, no-one else offers 1 gig upload and it makes a massive difference to backups etc.

I spent years tweaking stuff, finding routers that are the most sensitive to get the most possible out of my 33meg VDSL line - spending ages waiting for G.fast to boost it up a bit.   Then suddenly overnight none of that matters anymore.    Whenever I download stuff or upload stuff now I am just at the mercy of the speed of the other end.

It is actually faster for me to transfer stuff to one of my friends who is also UFO than it is to copy between hard drives in my server (they are slow hard drives with SMR).

It's fab when you need to download .ISOs for the next raspberry PI project and it takes seconds as opposed to 20 or 30 minutes.