This may be a daft question but could someone advise why you change the DNS via the "TalkTalk Wi-Fi Hub" section using the DNS tab rather than the "Internet Connectivity" section using "Manually Specify DNS" (as below). 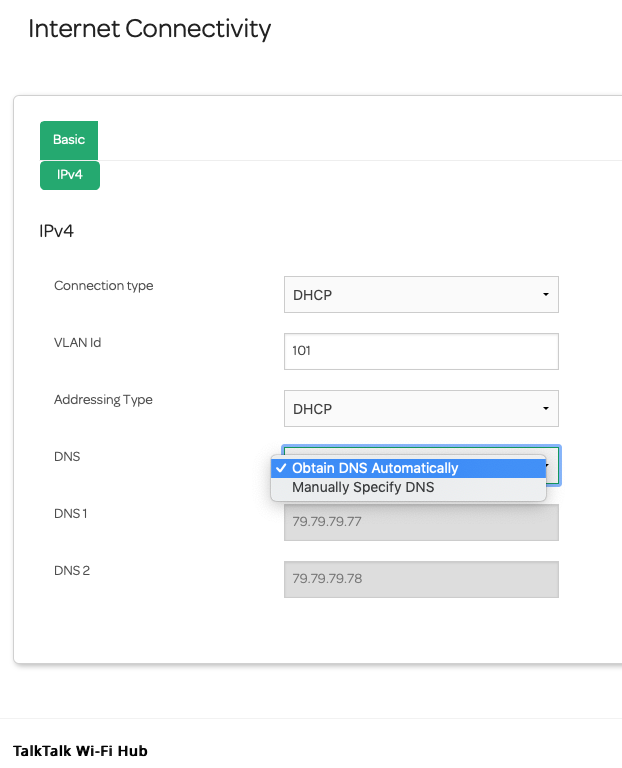 I’ve plugged in Cloudflare at the moment, must admit though the TalkTalk default dns hasn’t given any issues or been slow, just wanted to experiment a bit (and get to know the Hub a little better).

Had the Wi-Fi Hub about 4 days now to replace the Super Router because I was struggling with streaming content around the house, very pleased with the initial results on that front, and broadband has basically stayed the same at nearly 38 down and 9.5 up which is close to package max and what the previous router was giving.

Did read a few having issues when switching to the Hub in that broadband slowed a little, I haven’t seen that yet, fingers crossed.

Anyhow, with respect to dns I’ll probably end up doing as you have, in that I’ll select two to add for primary and secondary, possibly Cloudflare and Google.

Thanks again for your time.

No worries. Personally I use a mix of Google and OpenDNS for my Primary and Secondary servers, other DNS servers are available!  🙂

Thank you, your time is much appreciated.

Your fastest resolution from your devices is always to your router rather than an external DNS, try a wired ping to 192.168.1.1 😉

Thanks, does that mean if you don’t use the TalkTalk Wi-Fi Hub section to make any DNS changes rather than potentially speeding up web site resolving (by using a faster DNS service) you will be actually increasing time taken therefore defeating the original objective.

OK, it's basically LAN and WAN side. You will find if you manually change the settings in the Internet Connectivity section that the other box will become greyed out, fixing the LAN side DNS to the router IP address.

Thanks, but was hoping someone could explain “why”! Just interested to know the reason, that’s all, especially since DNS is under both sections and appears to be editable under both.